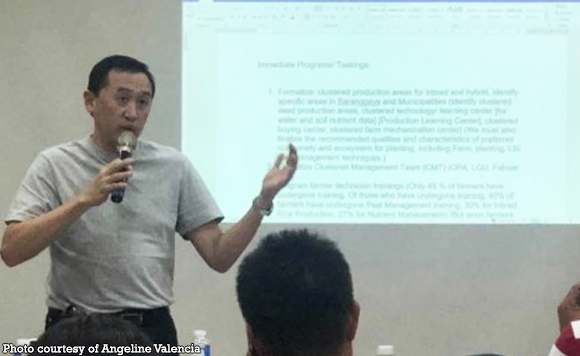 Gov. Arthur Yap said in a statement on Wednesday that the launching of the Advanced Rice Technology (ART) of the provincial government last week ushered in the idea of bringing PhilRice right at the doorstep of the Boholano rice farmers.

PhilRice has a central experiment station in Maligaya, Science City of Muñoz in Nueva Ecija and another national research center at the University of the Philippines in Los Baños, Laguna.

He said he relayed to Quilang that the provincial government is willing to provide the facilities for the PhilRice satellite branch in Bohol and the national government will provide the staff.

“To start, PhilRice can send three or four personnel and the Office of the Provincial Agriculturist (OPA) will augment more local personnel,” he said.

Bohol, he said, should have its own Soil and Water Center to be run by the Bureau of Soils and Water Management of the Department of Agriculture (DA).

The idea of putting up the soil and water research site in Bohol was already discussed with DA Secretary William Dar.

The provincial government will provide for the building each for both PhilRice and the Soil and Water Center and augmentation staff, Yap said.

“Let me announce to you that we already have an agreement with Sec. William Dar to set up our own Soil and Water Center. What I asked for them was easy. Who will manage? I want the national government to support in assigning for personnel. And, that’s what we are going to do with our Bohol Soil and Water Center and the satellite office of PhilRice,” he said.

He said Boholanos want to learn how to analyze and solve the issues on their soil and water in order to have an efficient farming system.

Treñas thanks Lopezes for donations in fight vs COVID