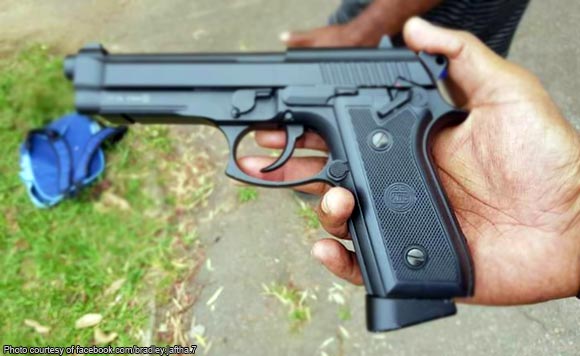 0 1,578
Share
Want more POLITIKO News? Get the latest newsfeed here. We publish dozens and dozens of politics-only news stories every hour. Click here to get to know more about your politiko - from trivial to crucial. it's our commitment to tell their stories. We follow your favorite POLITIKO like they are rockstars. If you are the politiko, always remember, your side is always our story. Read more. Find out more. Get the latest news here before it spreads on social media. Follow and bookmark this link. https://goo.gl/SvY8Kr

Police in Western Visayas are ready to implement starting Sunday, Jan. 13, the gun ban for the May 2019 midterm elections.

The Police Regional Office 6 reminded residents the Commission on Elections’ calendar indicates the gun ban will last until June 12.

During the gun ban, no one is allowed to deliver, carry or transport firearms, explosives, ammunition or other deadly weapons.

“Violation of the said prohibited act shall constitute an election offense. Uniformed personnel who will violate the same will face dismissal from the service,” Bulalacao said.

He said gun owners could be jailed for one to six years if they violate the gun ban. Violators would also be deprived of their right to vote and to hold public office.

Bulalacao said applications for exemption must be filed with the Comelec’s Committee on Ban on Firearms and Security Personnel in Intramuros, Manila until May 29.