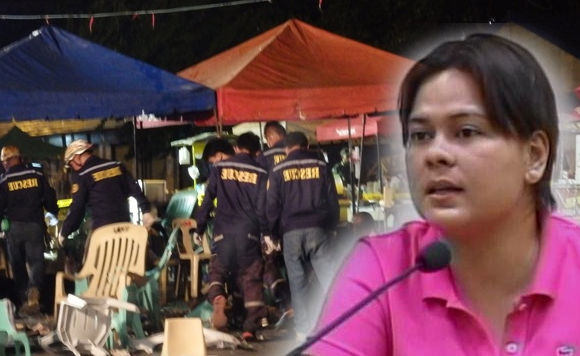 Davao City Mayor Sara Duterte may be pregnant with triplets, but she’s not going to let it get in the way of her job— especially in light of the blast which left at least 14 people dead.

In a statement, Duterte told other officials to let her take charge following the explosion at the Roxas night market Friday night (Sept 2).

“I would like to remind other officials to stay within the bounds of their official duties according to their position. Please leave me in peace to do my job and I’ll leave you to focus on your own work,” she said Saturday (Sept. 3).

The mayor expressed her condolences to the families of the casualties and assured them of the government’s support.

“I would also like to reassure all of them, as well as the families of those who are injured that the City Government of Davao will assist in all their needs for hospitalization, burial, funeral and day to day expenses,” she said.

Although Duterte is sorry for the incident, she said the city will not cower in fear because of what happened.

“We will not be terrorized by this heinous crime and I call on all Dabawenyos to unite and let us help each other rise from this senseless incident,” she said.

“Let us remain vigilant, please report any and all suspicious activity, no matter how insignificant it may seem,” the mayor added.

The Abu Sayyaf Group has claimed responsibility for the attack although authorities say they are also investigating other leads about the incident.

A memorial will take place at 4 p.m. Saturday at the explosion site. Duterte said everyone is welcome to say their prayer, lay their flowers and light a candle for those who passed away.