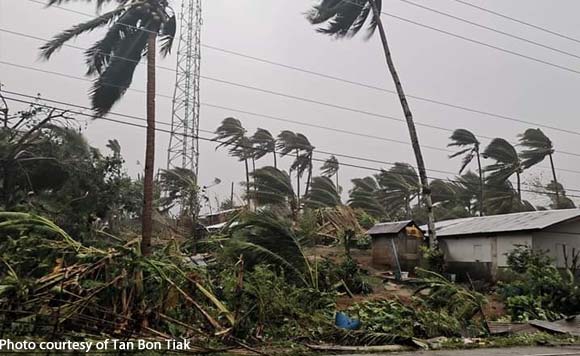 0 2,105
Share
Want more POLITIKO News? Get the latest newsfeed here. We publish dozens and dozens of politics-only news stories every hour. Click here to get to know more about your politiko - from trivial to crucial. it's our commitment to tell their stories. We follow your favorite POLITIKO like they are rockstars. If you are the politiko, always remember, your side is always our story. Read more. Find out more. Get the latest news here before it spreads on social media. Follow and bookmark this link. https://goo.gl/SvY8Kr

The provincial government of Samar on Sunday approved the resolution of the Provincial Disaster Risk Reduction and Management Council (PDRRMC) that recommended placing the entire province under a state of calamity due to the devastation caused by Typhoon Ursula on Christmas Day.

The resolution was sponsored by Board Member Lee Zosa and was unanimously approved by the provincial board headed by Vice Governor Angelica Gomez-Teodoro.

The declaration came two days after the PDRRMC headed by Governor Michael Tan approved the resolution requesting the provincial board to declare a state of calamity.

“The number of families and individuals affected by the typhoon have reached 43,173 and 134,283 respectively, which is equivalent to 17.20 percent of the total population of the province,” the declaration stated.

In the initial damage assessment in the province, at least 2,841 houses were reported totally damaged while 28,720 were partially damaged, with a total cost of P344.9 million.

At least one death was recorded in the province, as of December 30.

The fatality was identified as Maria Jessica Carpio, 29, of Barangay Roxas, Basey, who suffered head injury from a fallen coconut tree.

Samar is the fourth province along Ursula’s path in Eastern Visayas that declared a state of calamity. Leyte province was the first to declare followed by Eastern Samar and Biliran.

Tacloban City, the capital of Eastern Visayas, also declared a state of calamity after suffering major damage due to Ursula.

The town of Daram issued the same declaration on Saturday.

Based on the damage report of the Daram Municipal Disaster Risk Reduction and Management Office, a total of 1,174 houses were totally damaged by the typhoon while 4,956 were partially damaged.

Damage to agriculture was placed at PHP113.3 million; fisheries at PHP156.306 million; and infrastructure, PHP160.2 million

Daram, along with the towns of Sta. Rita and Marabut, remain unenergized as power restoration continues in the province with the help of linemen coming from Mindanao regions.

The Samar Electric Cooperative is targeting to energize all their coverage area affected by the typhoon before New Year’s Day. (PNA)