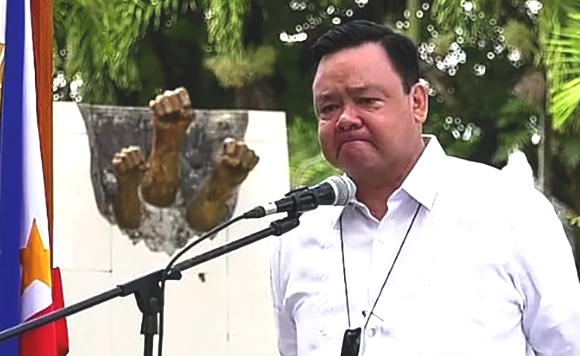 Iloilo City Mayor Jerry Treñas could not hold back his tears during Monday’s flag-raising ceremony at Plaza Libertad as he prayed for divine support amid the ongoing coronavirus (Covid-19) outbreak.

Treñas first spoke to Iloilo City Hall employees, particularly the recent developments in the city as cases of Covid-19 continue to surge.

He mentioned the Iloilo City Fishing Port Complex that was placed on a temporary lockdown following the death of a fish broker who tested positive for the virus. (https://bit.ly/2DgrKhA)

In the last part of his speech, Treñas became emotional and got teary-eyed while leading the Lord’s Prayer.

“Father, heal our land,” the mayor said as he ended his speech.

According to him, he wasn’t able to contain his emotions because of the pandemic’s toll on everybody.

Despite his lengthy track record as a public official, Treñas said the pandemic has become his biggest challenge in public service.

“I was not able to contain my emotions as I lead the prayer together with our City Hall employees to ask for a divine support. During my service since 1986, this is my first time to experience this challenge but with the help of everyone, we can survive this pandemic,” he also said.

The mayor also expressed his worry over the surge of cases in Iloilo City, especially that the virus has penetrated the City Hall with one of the legislative staff of Councilor Allan Zaldivar testing positive.