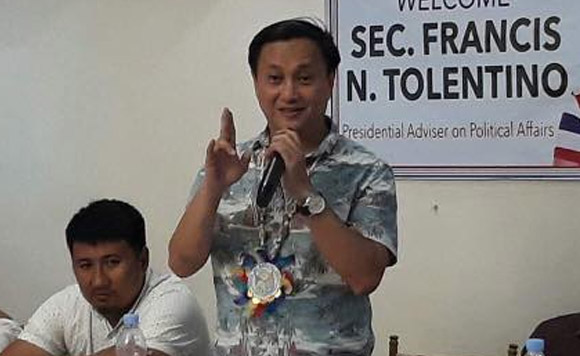 The election of the Association of Barangay Councils (ABC) next month should unify and not divide grassroots politikos in the country.

This was the reminder of Secretary Francis Tolentino, Political Adviser of President Rodrigo Duterte, in his speech in this city Sunday.

“The ABC presidency should not be a divisive issue in any municipality. Instead, the ABC election should be a unifying event for all the LGUs,” he said.

Also, Tolentino warned all the village chiefs who will win during the ABC election not to conduct blowout party after the election.

Instead, he said that they should immediately “embrace their opponent and convene the ABC board together with all the barangay chairmen.”

“Thereafter, try to outline an integrated barangay disaster preparedness plan. Do it first,” he stressed.

Tolentino mentioned that Iloilo has been hardly hit by Typhoon Frank in 2008.He said there are some village chiefs that would worry about their small amount of local disaster fund, which is only 5 percent of their respective Internal Revenue Allotment shares.

However, Tolentino said villages could combine their disaster fund to purchase some ambulance, rescue equipment and for the training of rescuers to improve their disaster response.

His suggestion, he said, is not prohibited by the Commission on Audit (COA) and the Local Government Code.