This is for greater good: Treñas appeals for understanding as Iloilo City reverts to MECQ 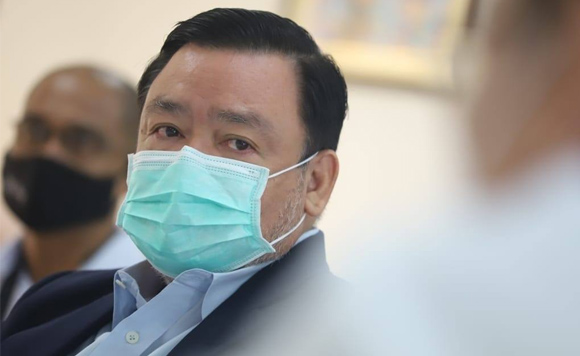 ILOILO CITY – Mayor Jerry P. Treñas has appealed for understanding and urged Ilonggos to adhere to strengthened protocols as the city has been placed under modified enhanced community quarantine (MECQ) for 15 days effective Friday (Sept. 25) by the Inter-Agency Task Force for the Management of Emerging Infectious Diseases (IATF-EID).

In his address via his Facebook account, Treñas said the increased cases of coronavirus disease 2019 (Covid-19) in the metropolis prompted the Covid team to recommend for the MECQ.

“I would like to remind everyone that this decision does not aim to further increase the impacts of the pandemic in our local economy but rather we are doing this for the greater good of the people,” he said.

He said that Iloilo City has 2,156 total cumulative cases with 530 active cases and 1,590 recoveries.

The mayor added that there is a great possibility that more positive cases will be detected as the city government has been testing people daily. More or less 27,000 residents have already been tested.

In his message, he also appealed for a “deeper understanding” from the business sector.

“We cannot put anyone’s health at risk for our desire to boost the local economy. Safety should still be our priority,” he said.

Currently, the compliance team is making sure that the minimum health standards and the imposed guidelines are followed, as he urged everyone to keep their faith intact.

“The Iloilo City community, just like the rest of the world, has been fighting a tough battle against Covid-19. And there is a need for collaborative efforts so we can really flatten the curve and get back to the life as we all used to live,” the mayor.

On Thursday, he already signed Executive Order No. 149 for stricter protocols until Oct. 9.

During the entire MECQ period, a liquor ban is in effect while curfew hours have been set at 9 p.m. until 4 a.m. the next day.

Individuals with risk factors to include pregnant women, persons with disability (PWD), and those with co-morbidities and immunodeficiency can only get out of their houses to access food, medicines and other essentials such as to seek medical consultation, care and intervention.

His Executive Order No. 149-A further amending his previous order, stated that all workplaces, both public and private, including work operations at the city government shall operate on a 50 percent capacity and urged to practice alternative work arrangements.

Further, courts are “physically closed” as per Supreme Court Administrative Order 39-2020 subject to further issuances and mandates on the matter.

Moreover, banks, financial institutions and other similar establishments shall operate in 100 percent capacity, provided that banking hours shall only be until 1 p.m. subject to further issuances of the Bangko Sentral ng Pilipinas (BSP).

The mayor, however, allowed trips from all ports and flights from Iloilo City on Friday.

“We do not want to overly inconvenience our residents from Iloilo who wish to travel to Iloilo but got caught in the higher quarantine classification today,” he said. (PNA)