That’s the President’s choice: Lucy Torres-Gomez not keen on being Speaker 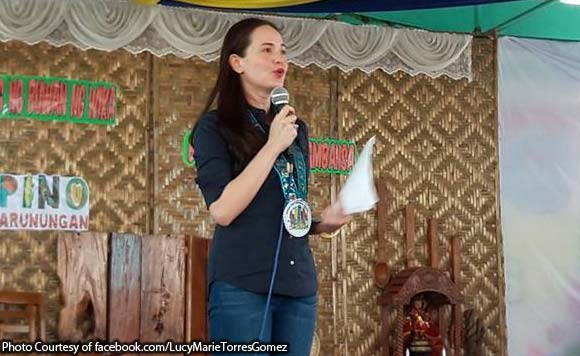 0 3,085
Share
Want more POLITIKO News? Get the latest newsfeed here. We publish dozens and dozens of politics-only news stories every hour. Click here to get to know more about your politiko - from trivial to crucial. it's our commitment to tell their stories. We follow your favorite POLITIKO like they are rockstars. If you are the politiko, always remember, your side is always our story. Read more. Find out more. Get the latest news here before it spreads on social media. Follow and bookmark this link. https://goo.gl/SvY8Kr

TACLOBAN CITY — Actress-turned-congresswoman Lucy Torres-Gomez is not aspiring to become the next Speaker of the House of Representatives, even if her name is on the shortlist.

Torres-Gomez was the last top elected official in Leyte proclaimed by the provincial board of canvassers at the capitol here after corrupted SD cards delayed the transmission of votes in Ormoc City.

Torres-Gomez said that instead of thinking of becoming a House Speaker, she would rather put her focus on how she can improve her performance as a lawmaker.

“The straight three terms is not enough to finish all the work that needs to be done. That’s the life of a public servant. There is always something that can be done better.”

For this term, Torres-Gomez said that among the bills that she will be pushing are those that can help develop the tourism industry.

The Torres-Gomez political clan ended the 27-year dynasty of the Codilla family in northwestern Leyte as the Torres-Gomez clan succeeded in expanding their turf.

The clan took the last bailiwick of the Codillas – the town of Kananga, Leyte – after Lucy’s brother, Board Member Matt Torres, beat incumbent Mayor Rowena Codilla in the mayoral race. (PNA)