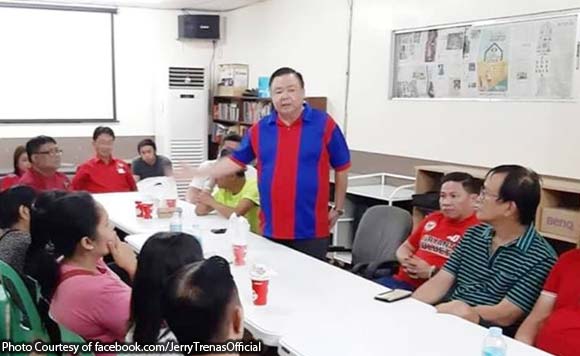 0 4,221
Share
Want more POLITIKO News? Get the latest newsfeed here. We publish dozens and dozens of politics-only news stories every hour. Click here to get to know more about your politiko - from trivial to crucial. it's our commitment to tell their stories. We follow your favorite POLITIKO like they are rockstars. If you are the politiko, always remember, your side is always our story. Read more. Find out more. Get the latest news here before it spreads on social media. Follow and bookmark this link. https://goo.gl/SvY8Kr

Iloilo City Rep. Jerry Treñas believes the calamity funds for the effects of El Niño will be used to influence voters.

Treñas said this after the Sangguniang Panlungsod passed a resolution declaring Iloilo City under the state of calamity due to water crisis.

The city has P115 million in local disaster risk reduction and management funds.

“Do they have a concrete plan on how to spend this huge amount of money? What’s their plan that they can implement properly and fulfill in nine days’ time? We don’t see any plans except that this money will be used for the political machinery of the current admin comes election,” a statement of Treñas’ Team “Uswag” read.

Instead of asking for P115 million calamity fund, the opposition group said the administration of Mayor Jose Espinosa III can tap its Quick Response Fund amounting to P57 million to resolve the water shortage in some parts of Iloilo City.

“We are one in addressing the water supply shortage in our city, but we want to do it right and care,” they added.