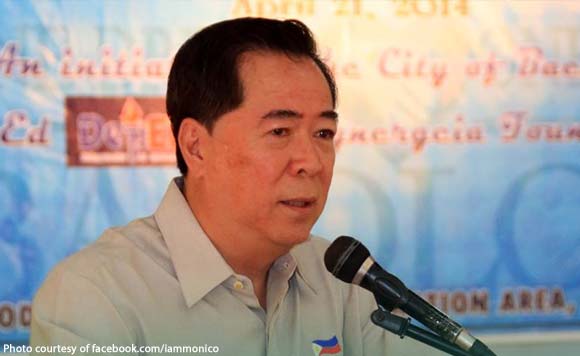 0 870
Share
Want more POLITIKO News? Get the latest newsfeed here. We publish dozens and dozens of politics-only news stories every hour. Click here to get to know more about your politiko - from trivial to crucial. it's our commitment to tell their stories. We follow your favorite POLITIKO like they are rockstars. If you are the politiko, always remember, your side is always our story. Read more. Find out more. Get the latest news here before it spreads on social media. Follow and bookmark this link. https://goo.gl/SvY8Kr

BACOLOD CITY — Citing unjustified delay in the investigation, the Office of the Ombudsman dismissed the consolidated cases filed against former Bacolod City Lone District Rep. Monico Puentevella and two others on the use of funds for the co-hosting of the 2005 Southeast Asian (SEA) Games here.

Copies of the dispositive portion of the nine-page ruling were furnished by the Puentevella camp to reporters on Tuesday.

“This dismissal is a welcome vindication and only shows that the filing of those cases was politically-motivated and meant to mislead the public from the resounding success of our hosting of the SEA Games,” he said in a press statement.

The criminal complaints stemmed from alleged malversation of public funds and failure to render accounts of the P50.5-million budget for the Bacolod Southeast Asian Games Organizing Committee (BASOC), which was chaired by Puentevella, who was then a congressman.

The former lawmaker and mayor, who is seeking a congressional post in the May 13 elections, said in a press conference he was thankful that the case has finally been resolved.

Puentevella said he received last Friday a copy of the decision, which was approved by Ombudsman Samuel Martires on February 7, 2019.

His co-respondents in the complaints filed by Samuel Montoyo of Save Bacolod Movement are Edwin Javellana and Eric Loretizo, finance head and secretary general of BASOC, respectively.

In the Feb. 2019 joint order, the Ombudsman reversed and set aside the joint resolution dated November 2016, finding probable cause against Puentevella for malversation of funds and violation of Section 3 (e) of Republic Act 3019 or the Anti-Graft and Corrupt Practices Act, and dismissed the two criminal cases.

The Ombudsman stated that there was “clear and unjustified delay in the Field Investigation Office’s (FIO) fact-finding investigation, hence the body is constrained to dismiss” the cases “in observance of Puentevella’s constitutional right to speedy disposition of the cases against him.”

It added that in determining whether Puentevella’s right has been violated, the Ombudsman considered the “length of delay, the reasons for the delay, the assertion or failure to assert such right by the accused, and the prejudice caused by the delay,” as attendant factors to its evaluation.

According to the ruling, the cases were first endorsed to the anti-graft body in 2009, but the FIO only terminated its fact-finding investigation in 2014 when it filed its complaint before the Office of the Ombudsman-Visayas.

The records failed to show that the FIO was able to justify why it incurred a delay of five years in terminating the fact-finding investigation, it further said. (PNA)