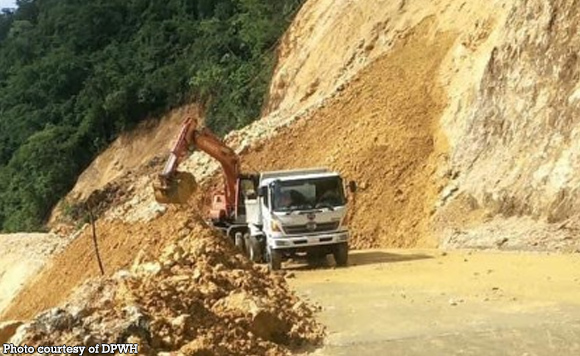 0 2,689
Share
Want more POLITIKO News? Get the latest newsfeed here. We publish dozens and dozens of politics-only news stories every hour. Click here to get to know more about your politiko - from trivial to crucial. it's our commitment to tell their stories. We follow your favorite POLITIKO like they are rockstars. If you are the politiko, always remember, your side is always our story. Read more. Find out more. Get the latest news here before it spreads on social media. Follow and bookmark this link. https://goo.gl/SvY8Kr

TACLOBAN CITY — The Department of Public Works and Highways (DPWH) is seeking at least P96 million to carry out permanent solutions to the perennial problem of landslides and rockslides in Taft, Eastern Samar.

Rojas said the frequent erosions in the area with a very steep slope were due to the composition of the land, which is limestone that is easily dissolved on acidic rain.

“We have already requested for interventions from our central office as endorsed by our regional director last week,” Rojas said in a phone interview. “When the road slope is reduced from 90 degrees to 45 degrees, I guess we can guarantee the long-term solution to this problem.”

The detailed engineering work is still ongoing and once approved, they will seek a permit from the Department of Environment and Natural Resources and clearance from the Samar Island Natural Park since the road section is within a protected area.

Due to a series of landslides in Binaloan village since January 3, the DPWH Eastern Samar field office has closed the road to all types of vehicles several times, especially during rainy days.

“We have already cleared the area from landslide but this will continue to occur not unless the road slope is made into its ideal angle,” he added.

The road was opened to the public on January 14, after almost two weeks, but was again closed on January 15 after another landslide early morning.