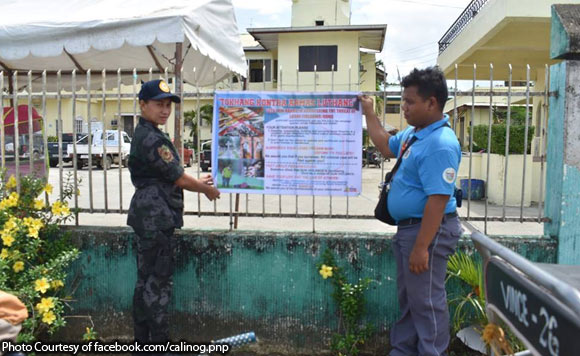 0 491
Share
Want more POLITIKO News? Get the latest newsfeed here. We publish dozens and dozens of politics-only news stories every hour. Click here to get to know more about your politiko - from trivial to crucial. it's our commitment to tell their stories. We follow your favorite POLITIKO like they are rockstars. If you are the politiko, always remember, your side is always our story. Read more. Find out more. Get the latest news here before it spreads on social media. Follow and bookmark this link. https://goo.gl/SvY8Kr

Police in Iloilo province started this week a new “Tokhang” campaign, this time aimed against loose firearms, due in part to the 2019 elections.

Dubbed “Tokhang Kontra Armas-luthang” (TKAL), the campaign aims to bring down the proliferation of loose firearms in the province.

She said the campaign will have two approaches, first of which involves house-to-house visits and information drives.

The second is the “iron hand” approach where those with loose firearms will be “targeted for police operations through search warrants,” she said.

During the first half of 2017, Antonano said that of 688 crimes recorded in the province, 116 involved loose firearms.

In the same period in 2018, the number went down with only 368 crimes recorded, 87 of which involved loose firearms.

With the campaign, Antonano said they can account for all the firearms in the province that have expired license or those that are not registered, and compel the owners to register.

“The campaign is expected to reduce incidents using loose firearms and it will also reduce the fear of the people in Iloilo regarding crimes,” she said.