Sayang: Lopez says she would’ve created more jobs if she was able to stop mining 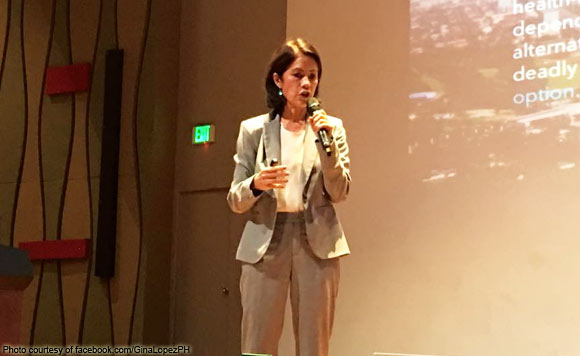 0 398
Share
Want more POLITIKO News? Get the latest newsfeed here. We publish dozens and dozens of politics-only news stories every hour. Click here to get to know more about your politiko - from trivial to crucial. it's our commitment to tell their stories. We follow your favorite POLITIKO like they are rockstars. If you are the politiko, always remember, your side is always our story. Read more. Find out more. Get the latest news here before it spreads on social media. Follow and bookmark this link. https://goo.gl/SvY8Kr

Former Department of Environment and Natural Resources (DENR) secretary Gina Lopez still believes she would have made a big difference in boosting the economy if only she was allowed to finish the job.

“If I had been able to stop the mining, we would have lifted the economy and created many more jobs for the people compared to what we’re earning from the mining sector,” Lopez said.

“Wherever there is mining, the poverty level there is higher than the national average. What I really want to do is to have a ‘green’ economy and refund the money back to the people.”

Lopez graced a forum on Green Economy during the launching of the Renewable Energy Summit Thursday at the University of San Carlos Talamban Campus. Lopez is in this province to promote “Green Economy” which encouraged people to use renewable resources without destroying the environment.

“Just because the community is earning high, it doesn’t mean it is fully developed. A fully developed community doesn’t only benefit those who were managing it but also the people living in the area,” Lopez said.

As of this writing, Lopez is still meeting with City Councilor Joel Garganera about how she can help the city with its environmental problems. (PNA)