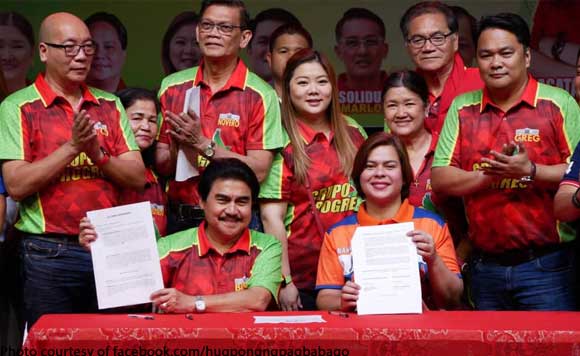 0 1,227
Share
Want more POLITIKO News? Get the latest newsfeed here. We publish dozens and dozens of politics-only news stories every hour. Click here to get to know more about your politiko - from trivial to crucial. it's our commitment to tell their stories. We follow your favorite POLITIKO like they are rockstars. If you are the politiko, always remember, your side is always our story. Read more. Find out more. Get the latest news here before it spreads on social media. Follow and bookmark this link. https://goo.gl/SvY8Kr

The alliance agreement between both parties was signed during the campaign sortie of the HnP at the Panaad Park and Stadium in Bacolod City, which was attended by 15,000 people.

Duterte-Carpio raised the hands of the GP candidates after the signing of the agreement and thanked Bacoleños for supporting her father in the 2016 presidential polls.

For his part, Leonardia expressed gratitude to the Davao City mayor, saying that he was honored that her regional political party held a rally in Bacolod City.

The agreement terminates on June 30.