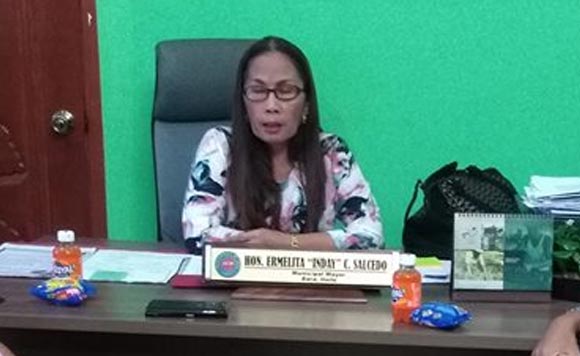 0 706
Share
Want more POLITIKO News? Get the latest newsfeed here. We publish dozens and dozens of politics-only news stories every hour. Click here to get to know more about your politiko - from trivial to crucial. it's our commitment to tell their stories. We follow your favorite POLITIKO like they are rockstars. If you are the politiko, always remember, your side is always our story. Read more. Find out more. Get the latest news here before it spreads on social media. Follow and bookmark this link. https://goo.gl/SvY8Kr

The Police Regional Office in Western Visayas (PRO-6) on Thursday night confirmed that incumbent Sara Mayor Ermelita Salcedo was no longer under their custody.

In an interview, Chief Superintendent John Bulalacao, Regional Director of PRO-6, clarified that the mayor was released late Wednesday afternoon, on the same day that simultaneous raids were conducted to enforce 15 search warrants resulting in the seizure of assorted firearms from her house.

“We do confirm that she was taken into our custody yesterday due to the pieces of evidence discovered within her property, a conjugal property between her and the former mayor Neptali Salcedo who was the subject of the search warrant,” he said.

The lady mayor’s husband remains at large together with other suspects.

“Considering that she is a co-owner of the property and by having constructive possession thereof of the numerous loose firearms, she was taken into custody for investigation. Technically though she was under arrest as she was temporarily deprived of his freedom,” he added.

Bulalacao said the police was authorized by law to take custody of suspects within reglamentary periods when there is probable cause to believe that the suspects have committed a crime, and to release them before the expiration of such period when a case was not immediately filed.

The lady mayor, Bulalacao said, has been released from police custody after their legal team assessed that her case might not be considered under the doctrine of constructive possession of firearm.

“She was temporarily released for further investigation and examination of the pieces of evidence. After which, we will decide whether to pursue filing the case through regular filing which can be done anytime even though she was released,” he clarified.

About 300 policemen were part of the composite teams from the Iloilo Provincial Police Office, 6th Special Action Force Battalion, and the Iloilo City Police Office Special Weapons and Tactics that conducted simultaneous raids in the Iloilo towns of Sara, Banate, Lemery and Estancia .

The raids resulted in the killing of two members of the influential Salcedo clan identified as Nerio, a dismissed police officer, his nephew, Nixon Jr., both of Barangay Poblacion Ilawod, Sara, for allegedly putting up a fight with the police. (PNA)