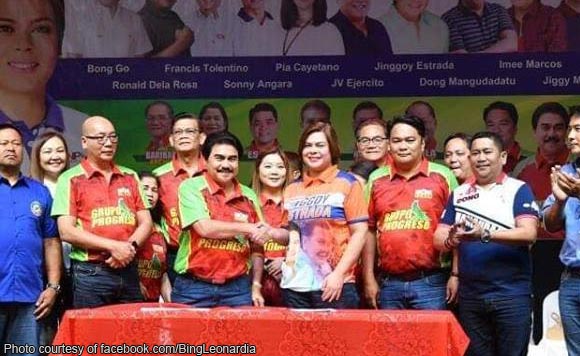 Regional party Hugpong ng Pagbabago (HNP) and the Bacolod-based political coalition Grupo Progreso (GP) have sealed an alliance for mutual support and cooperation in the May 13 senatorial and local elections.

The alliance agreement was signed by Davao City Mayor Sara Duterte, chairperson of HNP, and Mayor Evelio Leonardia, head of Grupo Progreso, during the campaign rally for the HNP senatorial candidates held at the Panaad Park and Stadium here Monday night.

“We are looking for many friends, like you, who will help campaign and support, and vote for senators who will also help the administration of President Rodrigo Duterte from 2019 to 2022,” Mayor Sara told an estimated crowd of 15,000 before the signing ceremony.

The agreement, which takes effect immediately and will terminate on June 30 this year, stated that the parties shall cooperate within the framework of their respective mandates and authority in the implementation of their responsibilities in pursuit of the agreement.

It said that the agreement will be effective for purposes of the 2019 senatorial and local elections, wherein the alliance will endorse a common senatorial line-up comprised of 13 senatorial candidates.

Both parties will carry, endorse and campaign for the senatorial candidates in the line-up, it added.

The candidates were present during the rally in this city except for Cayetano, Pimentel, and Marcos, who was represented by her brother, former Senator Bongbong Marcos.

Leonardia said he is honored that Bacolod has been chosen by the HNP to host one of its campaign rallies.

He added that Cayetano and Pimentel called him to say that they could not make it to Bacolod.

House Speaker Gloria Macapagal-Arroyo also came to the rally at the Panaad Stadium, but left after a while.

Earlier in the day, Macapagal-Arroyo and Negros Occidental Gov. Alfredo Marañon Jr. joined Duterte during the campaign caravan in Isabela, the hometown of the Arroyos.

Mayor Joselito Malabor hosted the rally at the Isabela Socio-Cultural Center, which gathered about 17,000 people. (PNA)