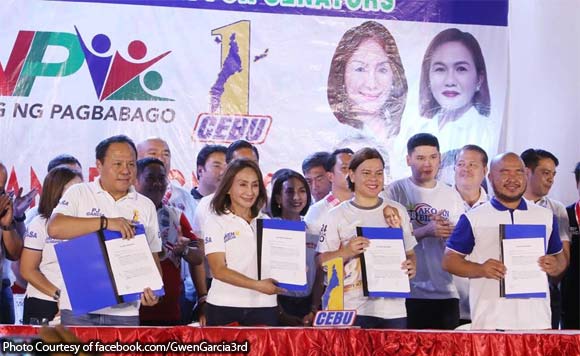 0 934
Share
Want more POLITIKO News? Get the latest newsfeed here. We publish dozens and dozens of politics-only news stories every hour. Click here to get to know more about your politiko - from trivial to crucial. it's our commitment to tell their stories. We follow your favorite POLITIKO like they are rockstars. If you are the politiko, always remember, your side is always our story. Read more. Find out more. Get the latest news here before it spreads on social media. Follow and bookmark this link. https://goo.gl/SvY8Kr

In front of supporters who flocked to the HNP campaign caravan at the Liloan gymnasium, Duterte and Garcia led the recitation of the oath of alliance along with the HNP and One Cebu stalwarts.

In her message, Mayor Sara said her regional party is tapping friends and allies who will rally behind the presidency of his father, President Rodrigo R. Duterte.

For her part, Garcia thanked the first daughter for her trust in One Cebu party.

She said the mayors from 44 municipalities and seven cities in the province of Cebu have pledged their commitment as One Cebu members to support and help the political agenda of HNP.

Liloan Mayor Christina Garcia-Frasco, daughter of Rep. Garcia, said the alliance sealed between her mother’s local party and Davao-based regional party is aimed at strengthening the campaign of President Duterte against drugs and corruption.

She cited the party’s passion in strengthening local government units and having stronger regions in the country.

Frasco also noted the strong relations between the town of Liloan and the city of Davao through a sisterhood agreement signed in October of last year.

“The sisterhood agreement will allow exchange of best practices, trade, as well as other measures of governance that will lead to development of our local governance here in Liloan and also contribute to Davao,” she said. (PNA)