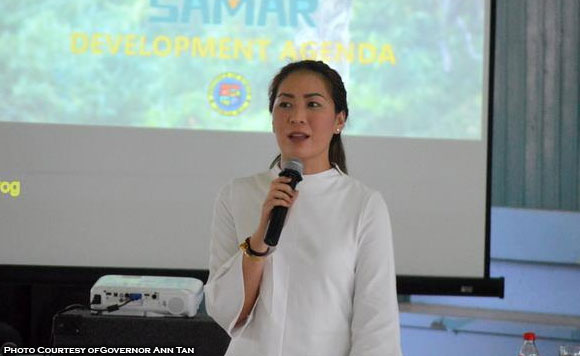 0 360
Share
Want more POLITIKO News? Get the latest newsfeed here. We publish dozens and dozens of politics-only news stories every hour. Click here to get to know more about your politiko - from trivial to crucial. it's our commitment to tell their stories. We follow your favorite POLITIKO like they are rockstars. If you are the politiko, always remember, your side is always our story. Read more. Find out more. Get the latest news here before it spreads on social media. Follow and bookmark this link. https://goo.gl/SvY8Kr

Samar Governor Sharee Ann Tan had expressed hope that the reshuffle of regional tourism officials would only be temporary, saying it was a setback to the region’s tourism industry.

Tan said the deployment of Department of Tourism (DOT) Eastern Visayas director Karina Rosa Tiopes to Zamboanga Peninsula was not good for the sustainability of projects.

“I know that the (DOT) secretary has good intention why she reshuffled the regional directors, but I would like to stress that in Region 8, this is not favorable to us,” Tan added.

Reassigning the top regional official might affect the implementation of the tourism program they had conceptualized in 2017, she said.

“My worry is that this might lead to delays in the implementation of tourism programs and projects because the new regional director will still have to study it and be familiarized with our region,” Tan added.

Among the tourism programs Samar province has lined up for 2018 is the three-day Spark Samar campaign in Metro Manila on March 9 to 11.

The activity aims to promote Samar’s tourist destinations with the Tandaya Trail on the first day, a fashion show highlighting woven mats on the second day, and the campaign for people who have roots in Samar to visit the province, on the last day.

Tourism officers in Eastern Visayas also shared the same sentiment, saying that a tourism regional chief should be familiar with the place where he/she is assigned to have a better concept and be more effective in the implementation phase.

Tiopes started her work in Zamboanga on Monday. Based on the directive of Tourism Secretary Wanda Corazon Teo, her replacement was Nelly Dillera, the DOT regional chief of the Soccsksargen region.

As of this week, the DOT regional office here had no regional director since Dillera was asked to head the Office of Industry Manpower Development at the central office.

Trina Dacuycuy, a senior tourism officer is the officer-in-charge of DOT-Eastern Visayas. (PNA)