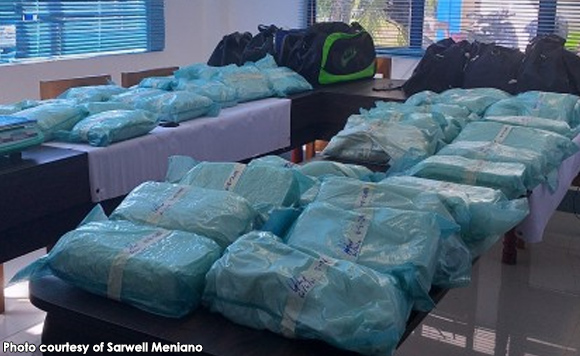 TACLOBAN CITY — Policemen in Samar intercepted some PHP600 million worth of shabu in Gandara, Samar on Thursday, the largest ever seizure of illegal drugs in the Eastern Visayas region.

Police Eastern Visayas Regional Director, Brig. Gen. Dionardo Carlos said in a press briefing Friday that the illegal drugs are intended for Cebu since the region is considered as the main transshipment point of illegal drugs due to the presence of ports in Northern Samar.

The 88.49 kilograms of shabu were picked up by two cars from a source in Quezon City and Imus, Cavite on Tuesday. Six suspects, including a pregnant woman and a 14-year-old boy, transported the contraband by land.

Carlos said upon receiving a report on the shipment from the police regional and provincial drug enforcement units, the Gandara town police station immediately set-up a checkpoint past 4 p.m. on Thursday along the main highway in Buñagan village.

The first target car yielded duffel bags filled with shabu in 25 packs. Authorities found 18 packs of shabu inside duffel bags when the second target car was checked. The drug carriers were unarmed and did not resist arrest.

“Intelligence operatives have prior information when the two cars arrived in ports of San Isidro and Allen, Northern Samar and headed south. They looked uneasy as they answered questions of policemen during the checkpoint,” Carlos said.

Arrested were Cesar Uy, 49; Steven Perez, 37; and a 14-year old boy, all are from Mambaling in Cebu City; Leonard Delos Reyes, 33 of Mandaue City, Elbert Camahalan Abella, 57, of Toledo City, and four-month pregnant Jeralou Lobarte, 34, a neighbor of Delos Reyes.

De los Reyes admitted in an interview with reporters this is the second time they were asked to transport shabu from Manila to Cebu through the Samar route, receiving instructions through mobile phone calls from a stranger.

The adult men are being paid PHP50,000 per shipment while the pregnant and minor got PHP20,000 for each trip.

“We are aware that we are carrying with them the illegal drugs, but we have no idea on the volume since we are not allowed to open it,” De los Reyes said.

The PNP will file cases against the five suspects at the municipal trial court of Gandara, Samar for violation of the Comprehensive Dangerous Drugs Act. They will also undergo drug tests after authorities confiscated drug paraphernalia from them.

The police turned over the minor suspect to the Department of Social Welfare and Development.

Carlos said they will never allow anyone to make the region’s nautical highway as transshipment of illegal drugs. He asked policemen to be alert especially in areas within the highway that links Luzon to Mindanao.

“After the recovery of packs of shabu in Biri, Northern Samar last August, we have been intensifying our intelligence gathering to stop this illegal drug transshipment activity in the region,” Carlos added.