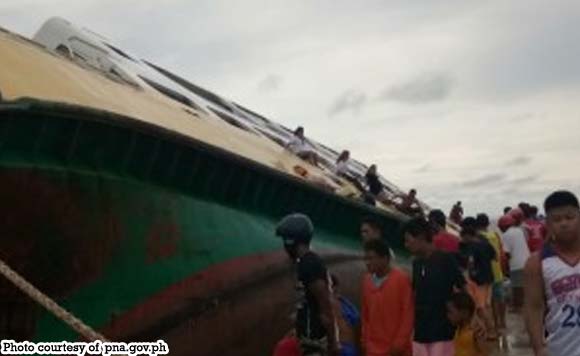 CEBU CITY — A RORO vessel tilted on its starboard side while in the process of unloading cargoes and passengers in the port of Consuelo in Camotes Island, Cebu province on Saturday.

Encina said a 10-wheeler truck was maneuvering to disembark when it suffered a transmission problem that led the vessel to tilt on its starboard side.

Coast Guard Camotes immediately responded and rescued all of the 149 passengers, four of whom were brought to the hospital with minor injuries, Encina said.

Encina said the vessel was carrying 11 rolling cargoes and four were still inside the vessel when it tilted.

The RORO vessel eventually left the port of Danao City around 11:45 a.m.

Early in July, another vessel of Jomalia Shipping was involved in an incident in the port of Danao City, where a truckload of rice fell on the waters after the mooring line accidentally snapped as it is being loaded.

The vessel was also bound for Camotes Island. (PNA)