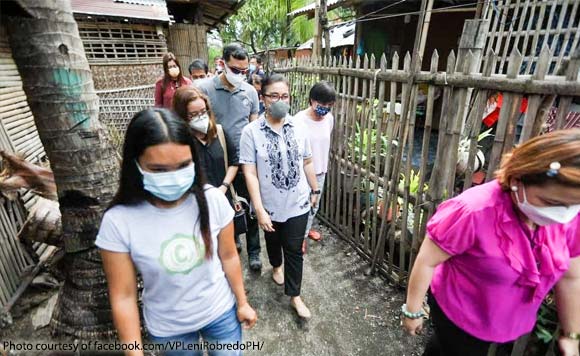 Upon her arrival in the province, Robredo proceeded to the towns of San Joaquin, Guimbal and Tigbauan in the 1st District. She also met with a farmers’ cooperative in Cabatuan town.

In San Joaquin, the Vice President’s Office funded a zero open defecation (ZOD) project back in 2018, which helped the municipality achieve ZOD Level 1 in December of the same year. (https://bit.ly/3qS5TQ6)

A total of 224 sanitary toilets were put up in poor households in 85 barangays.

In Tigbauan, Robredo inspected a Community Learning Hub (CLH) that her office put up in Barangay Bagacay in coordination with the Sangguniang Kabataan, municipal government and the youth organization EstrawngHeroes.

The CLH proved helpful to some 210 school children having a hard time studying their modules this pandemic. The learning hub is equipped with computers, printer, wi-fi booster, and school supplies.

In Cabatuan, the Vice President checked how a farmers’ organization had been doing after receiving in August last year several mechanized farm equipment such as tractors. Farmer-members previously used carabaos to plow their farmlands.