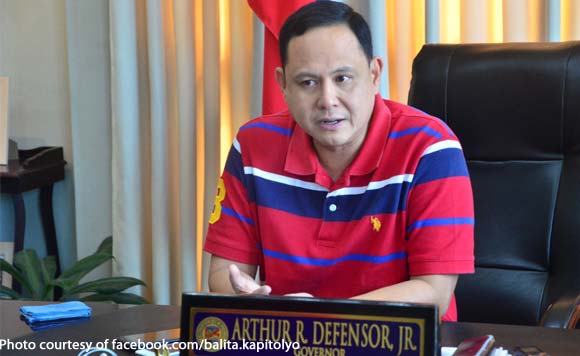 0 107
Share
Want more POLITIKO News? Get the latest newsfeed here. We publish dozens and dozens of politics-only news stories every hour. Click here to get to know more about your politiko - from trivial to crucial. it's our commitment to tell their stories. We follow your favorite POLITIKO like they are rockstars. If you are the politiko, always remember, your side is always our story. Read more. Find out more. Get the latest news here before it spreads on social media. Follow and bookmark this link. https://goo.gl/SvY8Kr

Returning Overseas Filipinos (ROFs) from Iloilo who cannot be accommodated in Iloilo City presents an opportunity for local businesses in the province.

They can be billeted in hotels and resorts in the province, according to Iloilo Governor Arthur Defensor Jr.

Defensor met with the Iloilo Chapter of the League of Municipalities of the Philippines after Iloilo City Mayor Jerry Treñas announced on Monday that the city will no longer receive ROFs who are residents of the province in accommodation establishments. (https://bit.ly/34tige6)

The governor and the mayors resolved that the ROFs will now be taken to accommodation establishments in their respective hometowns.

“I understand. Mayor Jerry Treñas is correct. The hotels in the city were overwhelmed because previously, the arrival levels were high. There were about three flights a day, so you would expect a ballooning. Our testing facilities were delayed after days of closure because of health workers who had tested positive. It’s also a burden on the accommodations of the city,” said Defensor.

He added that the reception of ROFs in the province was more of a welcome development as it could help them financially.

“We’ve already asked this of our tourism industry stakeholders for a long time, that it would be better for them to accommodate our ROFs, because, for me, that is really financial assistance from the national government to the tourism industry. That is good for the local economy as a substitute because we don’t have tourists coming in,” according to him.