Remains of ex-Senator Espina to be brought to Senate Wednesday 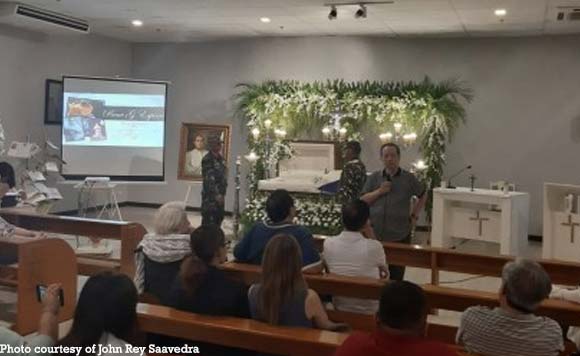 CEBU CITY – The remains of former Cebu Governor and Senator Jesus Marino “Rene” Espina will be brought to the Senate on Wednesday for public viewing and necrological service, his son said.

Espina passed away last Friday, Sept. 13, at the age of 89. Prior to his death, he was the last remaining member of the upper chamber under the 7th Congress of the Philippines.

Erik Miguel Espina, a Manila-broadsheet columnist and an Army reservist Brigadier General, said the remains of his father will be available for public viewing starting at 9 a.m. on Thursday, Sept. 18, and a necrological service will be held in the afternoon.

The younger Espina told the Philippine News Agency in an interview that Senate President Vicente “Tito” Sotto III is expected to speak on behalf of the current Congress.

“We are expecting Manong Johnny (Juan Ponce Enrile) and (former Sen. Francisco) Kit Tatad to speak. Senator (Franklin) Drilon volunteered (to speak),” he said, adding that while they wanted everyone to speak about his father, time is very limited because the remains will be brought back to Cebu on the same day.

The remains of the late former senator will be brought to the Cebu Provincial Capitol for public viewing and another short necrological service to be headed by former Governor Pablo “Pabling” Garcia.

Espina served as governor of Cebu Province from Dec. 30, 1963 to June 30, 1968. On Sept. 1, 1968, he was appointed by former President Ferdinand Marcos as Secretary of the Ministry of Public Works, Transportation, and Communication and served the office until Sept. 24, 1969.

He then became a member of the Philippine Senate in the 7th Congress from Dec. 30, 1969 to Sept. 23, 1972. The Senate at that time was under the leadership of the late Senate President Gil J. Puyat.

As senator, Espina crafted the country’s first anti-drug law, Republic Act 6425, which was known as the Dangerous Drugs Act of 1972.

At a necrological service here on Monday night, Tatad enumerated the contributions of the late senator in the government, having served in the Social Security System as its youngest administrator before being governor of Cebu, and later, to the 7th Congress.

Erik Miguel said his father will be interred on Sunday in a private cemetery in Barangay Talamban, this city.

A military 21-gun salute will be afforded to the late Cebu governor and senator, being a commissioned reservist officer with the rank of Captain. (PNA)