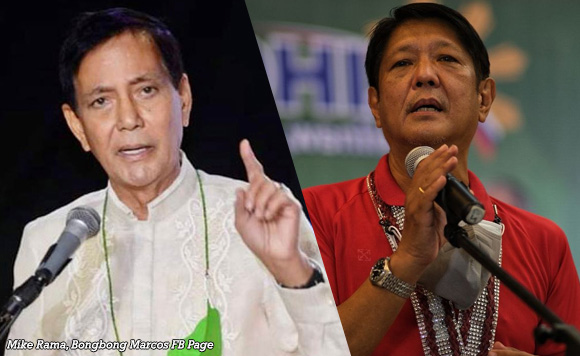 0 127
Share
Want more POLITIKO News? Get the latest newsfeed here. We publish dozens and dozens of politics-only news stories every hour. Click here to get to know more about your politiko - from trivial to crucial. it's our commitment to tell their stories. We follow your favorite POLITIKO like they are rockstars. If you are the politiko, always remember, your side is always our story. Read more. Find out more. Get the latest news here before it spreads on social media. Follow and bookmark this link. https://goo.gl/SvY8Kr

“We’ve been with BBM for [such] a long time. I know him and having so much experience from his father to his senatorship, governorship, put it all together the element of experience is very important,” said Rama.

“When you talk about capacity, let’s not talk about yesterday, let’s move forward. I can see Marcos and (vice presidential bet Sara) Duterte as – I called them even MD – the curing administration,” he added.

Reacting to the criticisms hurled against Marcos Jr., the mayor said that is not something new in politics.

“He is being perceived because he is very popular. When you are popular, just like mangoes, when it’s not yet ripe nobody cares but when it’s ripened everybody wants,” according to him.

Rama is also a candidate for city mayor in the 2022 elections.