Puro siraan! Bem Noel says 2019 is ‘hardest’ for An Waray in 5 elections 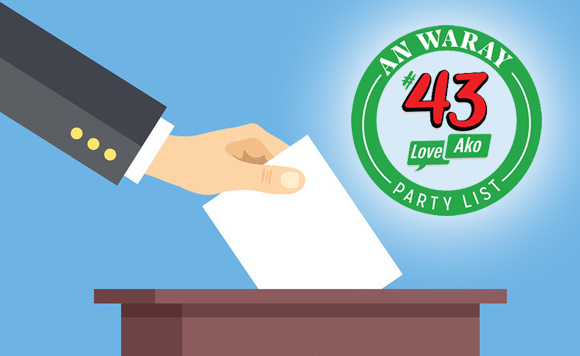 TACLOBAN CITY — After running in five elections, the An Waray Party-list said that the 2019 poll season is the most challenging as partylist groups are now more aggressive in wooing voters, particularly in the Eastern Visayas region.

Former congressman Florencio Noel, the party list’s first nominee and founder of An Waray, said they have been dealing with more negative publicities now than in the past elections.

“It is difficult running in an electoral race, but this year is the hardest because of the issues thrown against us,” Noel shared.

Noel, the brother of incumbent party-list Rep. Victoria Noel, is returning to the political scene after his term as party-list solon expired in 2013. He ran in the mayoralty race in Tacloban City in 2013, but lost to Alfred Romualdez, the nephew of former first lady Imelda Romualdez-Marcos.

The nominee admitted that they’re not getting enough support in Tacloban City even if their headquarters is based in the city due to the strong presence of the Tingog Party list by the Romuadez clan. The group’s first nominee is incumbent Leyte 1st district Rep. Yedda Marie Romualdez.

This is the second time that Tingog will be trying its luck for the House of Representatives seat. It failed to get elected in 2016 polls.

Other party lists with first nominees from Eastern Visayas are Aangat Tayo, Ako an Bisaya, and Kontra Brownout.

Although weak in Tacloban, the group is likely to gain one seat in Monday’s election, after their name came on top 14 among party-list groups assured to win based on the Pulse Asia survey.

There are 181 groups vying for 59 seats allotted for party-list organizations in Congress.

“We are happy with the result but we are not dependent on surveys because this is just a gauge where we should improve. So instead of rejoicing, we studied the result and try to improve our presence in areas where we are weak,” Noel added.

Formed in 2001, An Waray is a multi-sectoral organization of different organizations, federations, groups and individuals from the underrepresented sectors of the country particularly from the islands of Leyte, Samar, and Biliran. It advocates community-based and peace-oriented development in rural communities.

The party list’s thrust is to address the problem of urban migration, job creation, and quality education.

Their history reveals that the organization started from a small group of “coffee-drinking buddies” concerned with urban migration where they “defied political odds” by winning its first ever elections in May 2004. (PNA)