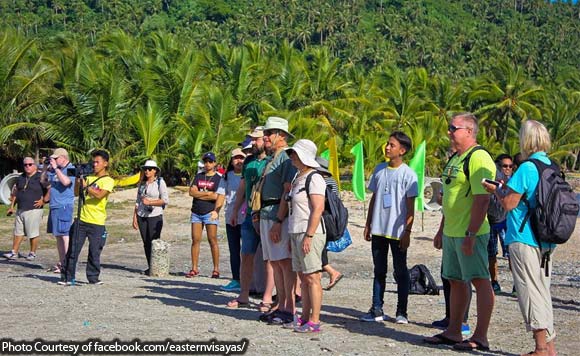 Spurred by the steady rise in tourist arrivals in the last five years, the Department of Tourism (DOT) has set higher targets for Eastern Visayas in the next four years.

DOT Eastern Visayas Regional Director Karina Rosa Tiopes said it would be realistic to aim for a 10 percent growth rate for foreign tourists’ arrival and 20 percent for domestic tourists.

“In the last five years, Eastern Visayas tourism rose by a compounded growth rate of 100.51 percent. All these were made possible with the determination, hard work, collaboration and convergence of all stakeholders,” Tiopes told the Philippine News Agency (PNA)

For 2018, the arrival target is 1.75 million, more than the 1.46 million actual number of tourists who visited the region in 2017. The tourism department will release last year’s final arrival data within the first quarter of 2019.

This year, the region’s six provinces expect to welcome 2.09 million foreign and local visitors. The figure is expected to rise to 3.59 million by 2022.

“Tourism in Eastern Visayas is looking at a bright horizon. Recent developments show good opportunities on tapping new tourist markets for both domestic and foreign tourists. Tour operators from Luzon and Metro Manila are now forging linkages with our own tour operators, accommodation facilities and tourist transport service providers to offer exciting tour programs in the region,” Tiopes said.

Among the destinations and activities, they want to market are the island destinations in Leyte province, farm and island tours in Biliran, diving and whale shark interaction in Southern Leyte, nature adventure activities in Samar, rock formations and historical islands of Northern Samar, and surfing sites in Eastern Samar.

“The region is now a favorite destination for high-end expedition cruise ships that bring their guests to shore excursions in Limasawa, Capul, Kalanggaman and Cuatro Islas. We also see chartered flights from foreign countries coming to the region in the near future,” she added.

The official recalled that despite the gloomy prediction in 2014 or the year after Super Typhoon Yolanda ravaged the region, visitor arrivals rose to over 964,000 or 31.7 percent higher than 2013.

“This was attributed to the many who came for relief, rehab and recovery work. Again, some said that when the volunteer workers left, the arrivals to the region would dramatically drop. Come 2015, the tourism industry proved them wrong as the arrival figures grew to almost 1.1 million,” she said.

The growth rate of 14.04 percent was much lower than in 2014, but the tourism department believed that the profile of those who came has started to change from rehabilitation and recovery workers to real tourists.