Pope, Tagle mourn Vidal’s passing. Find out when and where to pay your respects at his wake 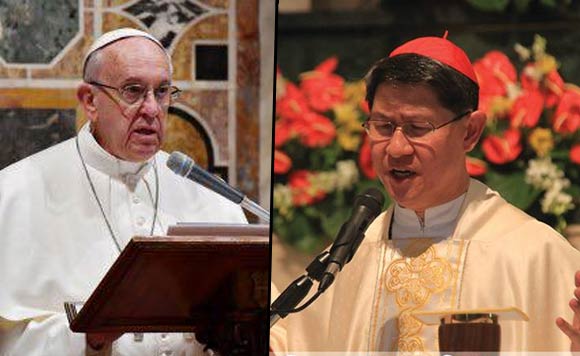 0 470
Share
Want more POLITIKO News? Get the latest newsfeed here. We publish dozens and dozens of politics-only news stories every hour. Click here to get to know more about your politiko - from trivial to crucial. it's our commitment to tell their stories. We follow your favorite POLITIKO like they are rockstars. If you are the politiko, always remember, your side is always our story. Read more. Find out more. Get the latest news here before it spreads on social media. Follow and bookmark this link. https://goo.gl/SvY8Kr

In a telegram sent to Cebu Archbishop Jose Palma, the Holy Father expressed sympathy to the people and the archdiocese over the death of the Philippines’ most senior cardinal.

“Deeply saddened to learn of the death of Cardinal Ricardo Vidal, I extend my sincere condolences to you, and to the clergy, religious and lay faithful of the Archdiocese of Cebu,” he said in a message transmitted Wednesday evening.

With this, the Pope acknowledged the late cardinal’s contribution to the Catholic Church.

“Joining with you in expressing profound gratitude for the late Cardinal’s untiring and devoted service to the Church, and for his constant advocacy of dialogue and peace for all the people in the Philippines, I commend his soul to the infinite love and mercy of our heavenly Father,” he said.

The pontiff added, “As a pledge of consolation and hope in the Lord, to all who mourn his passing in the certain hope of the Resurrection, I willingly impart my Apostolic Blessing.”

On the other hand, Manila Archbishop Luis Antonio Cardinal Tagle thanked God for allowing the Church and the faithful to know such a humble and peace-loving man.

“We will always be thankful to God for sending us a teacher of peace and humility. We trust that the merciful Lord would grant him eternal rewards in His presence,” he said in a message posted on the Facebook account of the Roman Catholic Archdiocese of Manila-Office of Communications.

Vidal, 86, died on Wednesday morning a week after he was rushed to the Perpetual Succour Hospital on Wednesday because of chest pain and difficulty in breathing.

His wake will be at the Cebu Cathedral for eight days except on October 21 wherein his remains will be brought to the St. Pedro Calungsod Shrine, located inside the archbishop’s residence compound.

Vidal’s funeral is set on October 26 at 9 a.m. at the cathedral. He will be buried at the mausoleum at the back of the sacristy.

He was born on February 6,1931 at Mogpog Marinduque to Faustino Vidal and Natividad Jamin. He studied at the Minor Seminary of the Most Holy Rosary in Sariaya, Quezon.

The Cebu cardinal studied Philosophy at Saint Francis de Sales Seminary in Lipa, Batangas and took up Theology at the San Carlos Seminary in Guadalupe, Makati City. He was ordained priest on March 17, 1956.

In 1971, Cardinal Vidal was appointed coadjutor of the Diocese of Malolos. Two years after, Pope Paul VI appointed him Archbishop of Lipa.

In 1981, Pope John Paul II appointed him coadjutor of Cebu and became Archbishop of Cebu on August 24, 1982. He succeeded Cardinal Julio Rosales.