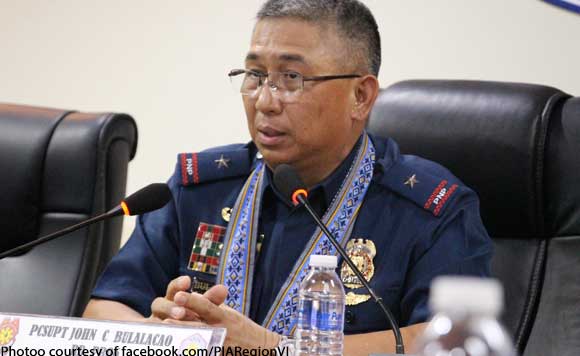 0 825
Share
Want more POLITIKO News? Get the latest newsfeed here. We publish dozens and dozens of politics-only news stories every hour. Click here to get to know more about your politiko - from trivial to crucial. it's our commitment to tell their stories. We follow your favorite POLITIKO like they are rockstars. If you are the politiko, always remember, your side is always our story. Read more. Find out more. Get the latest news here before it spreads on social media. Follow and bookmark this link. https://goo.gl/SvY8Kr

Police Regional Office (PRO)-6 reminded politicians not to yield to the extortion demands of the New People’s Army (NPA).

This, after PRO-6 received copies of the NPA’s alleged permit to campaign letters sent recently to three local candidates.

Chief Superintendent John Bulalacao said that giving in to their demands means supporting the rebel group.

In The Daily Guardian report, Bulalacao said reports on the NPA imposing permits to campaign are not alarming.

“We are already expecting it but I am bringing this out to you so that all politicians who have received this kind of letter from the CPP-NPA are warned as well, if we find out that they are acceding to the demands of the CPP-NPA, we would go file charges against them,” he added.

According to the police chief, any monetary dues given to the terrorist rebels in exchange for alleged permit to campaign or permit to win is a violation of the Terrorism Financing Prevention and Suppression Act of 2012.

The law imposes the penalty of reclusion temporal in its maximum period (16 years ) to reclusion perpetua and a fine of not less than P500,000 but not more than P1 million to any person who, “directly or indirectly, willfully and without lawful excuse, possesses, provides, collects or uses property or funds or makes available property, funds or financial service or other related services, by any means, with the unlawful and willful intention that they should be used or with the knowledge that they are to be used, in full or in part: (a) to carry out or facilitate the commission of any terrorist act; (b) by a terrorist organization, association or group; or (c) by an individual terrorist.”

Violators may also face disqualification based on the provisions of the Omnibus Election Code.