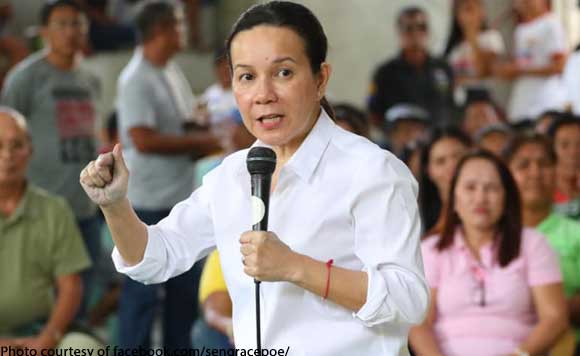 0 1,632
Share
Want more POLITIKO News? Get the latest newsfeed here. We publish dozens and dozens of politics-only news stories every hour. Click here to get to know more about your politiko - from trivial to crucial. it's our commitment to tell their stories. We follow your favorite POLITIKO like they are rockstars. If you are the politiko, always remember, your side is always our story. Read more. Find out more. Get the latest news here before it spreads on social media. Follow and bookmark this link. https://goo.gl/SvY8Kr

Reelectionist Senator Grace Poe urged Bacoleños to vote for a mix of senatorial candidates in the upcoming May elections.

Poe, who was in Bacolod City recently, said when choosing the best candidates for Senate, the electorate should have a balanced ticket.

“You know that would really be for the advantage of everyone. Of course, one party will always push for a straight slate. But for me, for example, in my own personal capacity, I talk to the people to vote for certain people who I know really work,” the lady politiko said in the Visayan Daily Star report.

“Together with them, we collaborated and we’ve come up with, what I feel, are substantial laws, according to her.