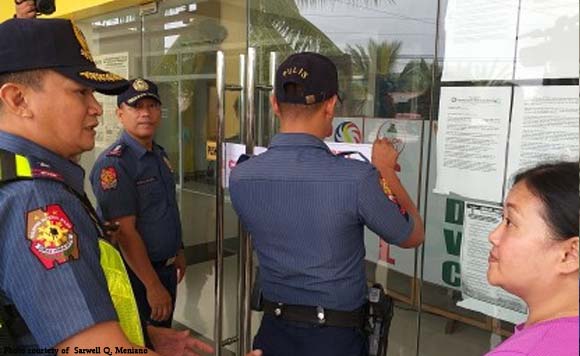 TACLOBAN CITY — Small town lottery winner Archie Dacut, 40, was shocked to see policemen shutting down lotto outlets in the northern part of this city on Saturday.

Dacut showed up to claim his PHP1,500 cash prize for winning the number combination on Friday night’s draw. He intended to use the money to pay his electricity bill due on Saturday, but he ended up wondering.

“I even borrowed PHP1,000 from my neighbor because I really expected to get my prize. I don’t know how I am going to pay my debt now,” the hotel worker told reporters.

He also instructed the removal of gaming and gambling materials of the PCSO gaming schemes in public areas.

“I have today ordered the closure, the stoppage of all gaming schemes or whatever nature, however done, that got the franchises to do so from the PCSO. The ground is massive corruption involving all… pati (including) the courts who repeatedly issued injunctions to paralyze government and to allow corruption to thrive,” Duterte said in a video posted late Friday.

Likewise, the Commander-in-Chief directed the Philippine National Police (PNP) and the Armed Forces of the Philippines (AFP) to ensure the enforcement of his order by Saturday morning.

PNP 8 (Eastern Visayas) Director, Brig. Gen. Dionardo Carlos, said policemen in the region have been going around to make sure that all franchised PCSO outlets are closed.

“Some operators of lotto outlets were aware. That’s why they did not open on Saturday, but we have to check that all are closed and those still operating will be arrested. We have to get this done within 24 hours,” Carlos added.

The official asked provincial directors to submit regular reports on the enforcement of the Chief Executive’s directive.

Gwenda Requiez, record-in charge of the Victoria Development and Ventures Corp., the operator of small town lottery in Leyte province and Tacloban City, said they were saddened by the news, but they have to follow the President’s order.

“This closure means 60 of our employees lose their jobs, and (it) affects the income of hundreds of coordinators and collectors,” Requiez told reporters.