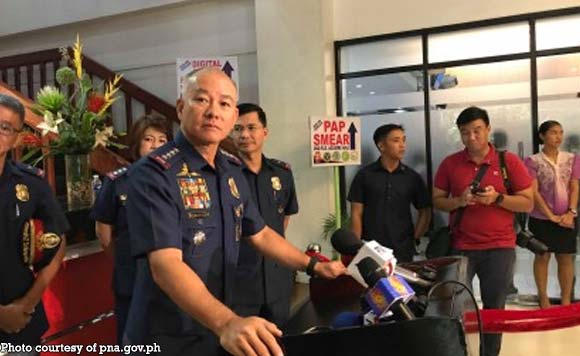 0 639
Share
Want more POLITIKO News? Get the latest newsfeed here. We publish dozens and dozens of politics-only news stories every hour. Click here to get to know more about your politiko - from trivial to crucial. it's our commitment to tell their stories. We follow your favorite POLITIKO like they are rockstars. If you are the politiko, always remember, your side is always our story. Read more. Find out more. Get the latest news here before it spreads on social media. Follow and bookmark this link. https://goo.gl/SvY8Kr

The Philippine National Police (PNP) has ordered a probe on the alleged existence of a death squad in Negros Oriental.

PNP chief, Gen. Oscar Albayalde said this was the first time that he heard about the anti-communist group called Kawsa Guihulnganon Batok Komunista (KAGUBAK) in the province.

“Personally, it’s the first time I heard about it and we don’t have any report about it from the regional director or even the provincial director (PD) on the existence of that alleged death squad. We will investigate that. I will have to talk to the PD there because he is new and I would have to talk with the RD on whether there is really a death squad there,” Albayalde said.

This came amid reports that the group has already killed five to 15 people on their hit list.

“That is among the things we are probing. As far as I know, majority of the victims of the killings have only one thing in common — they have leanings with the left. We also think it might be a case of purging (of the rebels). They sacrifice their own and then they blamethe security forces, the AFP, and PNP. This propaganda of left-leaning groups is not new,” the PNP chief explained.

It can be recalled during the hearing spearheaded by the Senate Committee on Public Order on Tuesday regarding the killings in Negros Oriental, Senator Risa Hontiveros said authorities should take KAGUBAK seriously to protect the names which are on the list of the so-called death squad. (PNA)