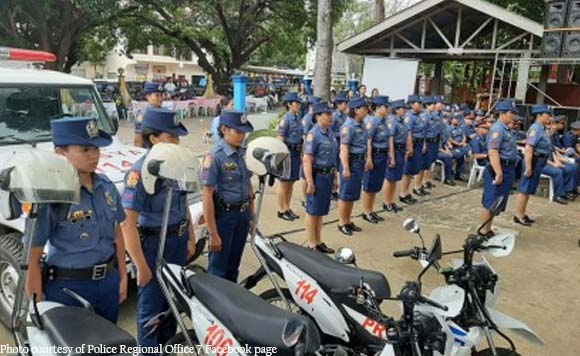 0 2,381
Share
Want more POLITIKO News? Get the latest newsfeed here. We publish dozens and dozens of politics-only news stories every hour. Click here to get to know more about your politiko - from trivial to crucial. it's our commitment to tell their stories. We follow your favorite POLITIKO like they are rockstars. If you are the politiko, always remember, your side is always our story. Read more. Find out more. Get the latest news here before it spreads on social media. Follow and bookmark this link. https://goo.gl/SvY8Kr

As part of efforts to uphold gender equality in all fields of social activity, the Philippine National Police (PNP) on Saturday made history with the launching of the first-ever municipal police station, which is ran by female police officers, on the island-province of Siquijor.

Police Regional Office 7 (Central Visayas) director, Brig. Gen. Debold Sinas, said the police station is operating in the Municipality of Maria on the island named as the “Mariang Pulis”.

“This move will strongly advance women empowerment in promoting public safety and security services at all levels of police units and offices in the region,” Sinas said.

The women-dominated police station follows a rich history of the municipality of Maria.

Long before the Spaniards came to Siquijor, a settlement known as “Kangminya,” named after a famous native woman, already existed. It was eventually renamed to “Maria” in honor of “Our Lady of Divine Providence”, which became the town’s patron saint.

Prior to the launch, Maria Police Station was complimented by only six policewomen.

Col. Angela Rejano, Siquijor Police Provincial Office (SPPO) director, profiled all the assigned policewomen in the province and selected those who will undertake the capacity development training.

Rejano said they were trained on driving, shooting, arresting techniques, and other police operation and intervention procedures such as checkpoint, Automated Fingerprint Identification System (AFIS), and first aid, among others.

She said the Maria Police Station is now operating in full capacity with 21 total police strength, the ideal police force for a Class C municipality.

“Having initiated this new concept of gender and development for policewomen in Siquijor, the Mariang Pulis signals the time to move forward in promoting the vision and mission of the PNP in creating an opportunity for women to strengthen their role in the context of policing in the law enforcement pillar,” Rejano said.

Earlier, the PNP- Highway Patrol Group (HPG) deployed a special unit composed of female motorcycle riders that will help their male counterparts in the flow of traffic on Edsa.

He said the team is composed of 20 policewomen, who are trained riders and traffic enforcement supervisors.

Cruz said despite being assigned on Edsa, the female riders are still not deputized to issue tickets but will be partnered with a male counterpart who is deputized by the Land Transportation Office and Metropolitan Manila Development Authority to issue citation tickets. (PNA)