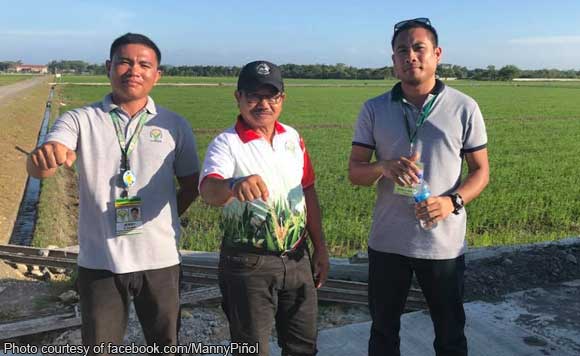 Department of Agriculture Secretary (DA) Manny Piñol, in a Facebook post, said he was disappointed during a recent visit to Murcia, Negros Occidental because the Philippine Rice Research Institute (PhilRice) station there only averaged five metric tons per hectare.

Piñol said the five-metric-ton-per-hectare at the 90-hectare experiment area in Barnagay Cansilayan is embarrassing since the DA’s target national average is six metric tons per hectare.

“Officials of PhilRice-Negros Occidental said they have a problem with water supply and they could hardly plant twice a year,” he said.

To address the problem, Piñol said the DA will build a solar-powered irrigation system at the PhilRice station this year.

“Right there and then, I instructed DA Region 6 Director Remelyn Recoter to source available funds so that a solar-powered irrigation could be established in the area,” Pinol said.

“Hopefully, next year, with the improved irrigation services, the PhilRice-Negros Occidental will become the center of excellence in rice farming that it should be,” he added.