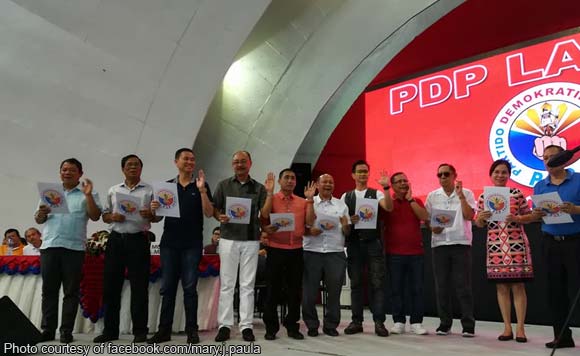 Where it has so far failed to do on Charter change, will the ruling PDP-Laban party succeed in Iloilo?

The party is seeking to unite the political scene in Iloilo by assimilating more of the province’s political figures.

He added their respective congressmen are “most likely to shift party.”

Alvarez is now leading the House efforts to amend the Constitution via constituent assembly but could not quite get support from the Senate led by his party-mate Aquilino Pimentel III.

The Speaker attended the mass oath-taking of more than 5,000 officials in the third congressional district Thursday, particularly invited the mayors from the 2nd and 5th districts to jump to PDP-Laban.

Provincial governor Arthur Defensor Sr. led the oath-taking at the Pototan Astrodome, and sees them going through all districts before yearend.

Defensor said he is hopeful other district and municipal officials will move to PDP-Laban this year.

While political leaders in the first district led by PDP-Laban Iloilo provincial chairman Rep. Oscar Garin Jr. took their oath in September 2017, those in the second, fourth and fifth districts have yet to join PDP-Laban.

Most mayors in the first, second and fifth districts have attended the basic seminars on membership and federalism before the swearing in.

On the other hand, 2nd district Rep. Arcadio Gorriceta remains with Liberal Party while Rep. Ferjenel Biron of the 4th district and Rep. Raul Tupas of the 5th district are with PDP-Laban ally Nacionalista Party.