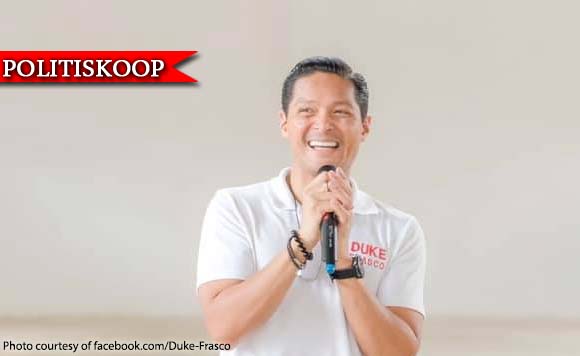 0 2,740
Share
Want more POLITIKO News? Get the latest newsfeed here. We publish dozens and dozens of politics-only news stories every hour. Click here to get to know more about your politiko - from trivial to crucial. it's our commitment to tell their stories. We follow your favorite POLITIKO like they are rockstars. If you are the politiko, always remember, your side is always our story. Read more. Find out more. Get the latest news here before it spreads on social media. Follow and bookmark this link. https://goo.gl/SvY8Kr

Cebu Governor Gwendolyn Garcia’s son-in-law is in hot water for allegedly hosting a series of mass gathering in Camotes Island despite the rising number of COVID-19 infections in the province.

In a complaint filed before the Department of Interior and Local Government (DILG), Cebu 5th district Rep. Vincent Franco “Duke” Frasco and two other officials have been charged for violating the existing health protocols laid down by the Inter-Agency Task Force (IATF) for not only spearheading a running and cycling competition in the Municipality of San Francisco but also for “leading a social party” along Santiago Public Beach in the town. Politiko obtained a copy of the complaint filed before the DILG Region 7 office by an anonymous individual, in which it was supported with videos and pictures that “Team Frasco” indeed hosted the events last July 10.

“With so many cases of COVID popping-up like mushroom in the Province and in Camotes Island and now, with the Cebu experiencing an unprecedented death rate, we now realize how insensitive and how callous the leaders concerned had been to have led and to have emboldened others to disregard important health protocols, at the expense of so many,” the complaint dated August 13 read.

Sun.Star Cebu earlier reported that the COVID death toll in the whole Cebu “has now hit 700 for just the first 18 days of August.” Meanwhile, at least 831 individuals died in Cebu from COVID with over half of the number from Cebu Province at 482, based on a recent article by The Freeman.

In the supporting videos and photos attached in the complaint, the events allegedly sponsored by Frasco and his team were “conducted without regard for health protocols.”

The events, particularly the beach party, according to the filed complaint, allegedly “caused or contributed significantly” to the spike of the pandemic not only in the island but in the entire province itself.

“The party was done without clearance from the Municipality and the Barangay. In fact, the connection of electricity for that party was done illegally which later caused a short circuit or fire during that time,” the complaint read.