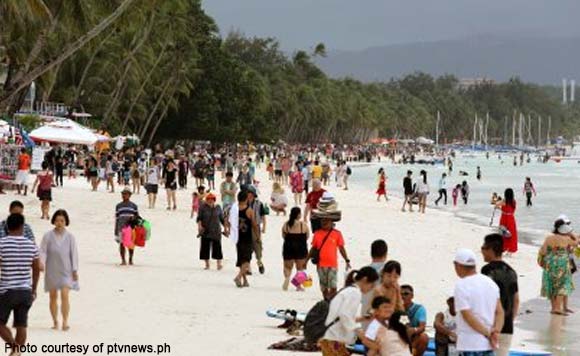 0 732
Share
Want more POLITIKO News? Get the latest newsfeed here. We publish dozens and dozens of politics-only news stories every hour. Click here to get to know more about your politiko - from trivial to crucial. it's our commitment to tell their stories. We follow your favorite POLITIKO like they are rockstars. If you are the politiko, always remember, your side is always our story. Read more. Find out more. Get the latest news here before it spreads on social media. Follow and bookmark this link. https://goo.gl/SvY8Kr

Some 200 personnel of the Philippine Army and the Philippine Navy are now in Boracay island in Malay, Aklan to help maintain peace and order during its six-month closure and rehabilitation.

Colonel Pio Diñoso, commanding officer of the Army’s 301st Infantry Brigade based in Dingle, Iloilo, said the augmentation will support security forces of the Police Regional Office 6 (Western Visayas), being the lead security agency in the island’s closure and rehabilitation.

The forces are composed of 60 personnel of the Citizen Armed Force Geographical Unit (Cafgu), 30 navy soldiers and the remaining are soldiers from the 12th Infantry Battalion based in Camp Monteclaro, Miag-ao, Iloilo.

“This closure is just more on environmental issue. We do not want this to shift or escalate to a security one. We do not foresee that there will be security problem that will be encountered, it will be more on minor incidents like criminality,” he said in an interview on Friday.

Diñoso said the peace and order situation in the island remains peaceful. “It is very peaceful because the concern is more on socio-economic,” he said.

He added the duration of the deployment of the soldiers will depend on the situation in the island, likely after the closure and rehabilitation.

“We will observe first because we need to support the PNP (Philippine National Police),” he said.

Diñoso assured the deployment of some of its soldiers in Boracay will not affect security operations in their area of coverage as the deloyed soldiers are “reserve personnel” and are easy to be shipped back.

The 301st IB covers the provinces in Panay and island province of Guimaras. (PNA)