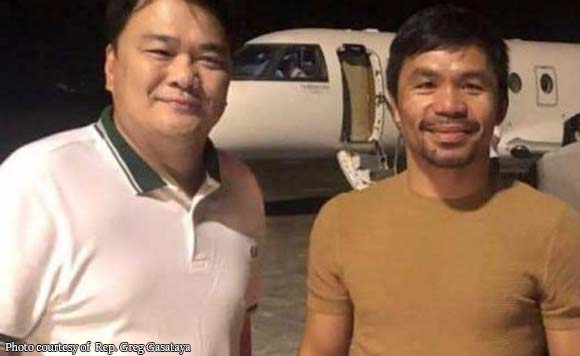 0 3,731
Share
Want more POLITIKO News? Get the latest newsfeed here. We publish dozens and dozens of politics-only news stories every hour. Click here to get to know more about your politiko - from trivial to crucial. it's our commitment to tell their stories. We follow your favorite POLITIKO like they are rockstars. If you are the politiko, always remember, your side is always our story. Read more. Find out more. Get the latest news here before it spreads on social media. Follow and bookmark this link. https://goo.gl/SvY8Kr

BACOLOD CITY — Senator Emmanuel “Manny” Pacquiao delighted many Bacolodnons with his warmth and generosity during his visit to this city over the weekend.

The boxing icon, an adopted son of Bacolod City, arrived here on Friday ahead of the Saturday night games of the Maharlika Pilipinas Basketball League (MPBL), which he founded, at the University of St. La Salle Coliseum.

“I miss the people here. It’s been some time since I last visited Bacolod,” Pacquiao told reporters in Hiligaynon during an ambush interview at his hotel before he watched the games.

Pacquiao promised to return to Bacolod during the 40th MassKara Festival next month.

In a separate interview at the venue, the senator said he gave out a total of P1.5-million in cash to Bacolod residents who lined up for hours just to get a glimpse of the “Pambansang Kamao” and receive a “balato” or a share of his blessings.

On Friday afternoon, some 200 people came to see him at the restaurant where he had lunch. When Pacquiao learned that they were fire victims from Barangays 2 and 3, he handed them P1,000 each.

Outside the GT Hotel on Galo-Locsin Streets starting Saturday afternoon, hundreds more waited for Pacquiao, who eventually went outside to meet them and gave away more cash, still at P1,000 each.

Local radio stations and newspapers showed on their Facebook Live posts Pacquiao giving away cash to Bacolodnons on Saturday.

The senator was hosted by city officials led by Bacolod City Lone District Rep. Greg Gasataya. Mayor Evelio Leonardia was still out of the country during Pacquiao’s two-day visit.

Pacquiao joined Gasataya in watching the face-off between Bacolod Master Sardines and Soccsksargen Armor On Marlins. The Bacolod squad defeated the Marlins in their first-ever home game in the MPBL Lakan Season.

In his Facebook post, Gasataya thanked Pacquiao for “bringing MPBL to Bacolod and for sharing (his) blessings to Bacolodnons for two days”.

“I personally witnessed your compassion for the needy and the sick,” the lawmaker added.