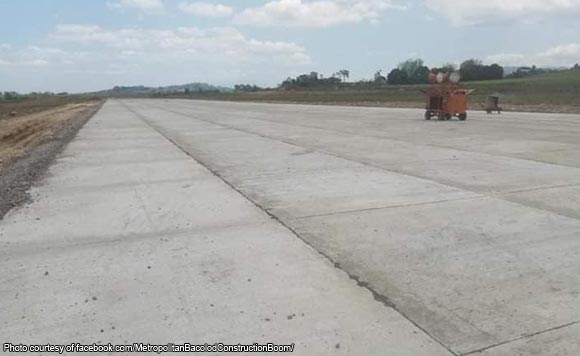 0 864
Share
Want more POLITIKO News? Get the latest newsfeed here. We publish dozens and dozens of politics-only news stories every hour. Click here to get to know more about your politiko - from trivial to crucial. it's our commitment to tell their stories. We follow your favorite POLITIKO like they are rockstars. If you are the politiko, always remember, your side is always our story. Read more. Find out more. Get the latest news here before it spreads on social media. Follow and bookmark this link. https://goo.gl/SvY8Kr

Some P90 million has been secured for the paving of the Kabankalan airport in Negros Occidental, Kabankalan Mayor Pedro Zayco said.

Zayco expressed hopes the construction of the Kabankalan airport runway and terminal will soon be completed with the allocation of more funds.

The airport has attracted the interest of the national government following the possible relocation of the Dumaguete City airport in Negros Oriental, he noted (https://dailyguardian.com.ph/p90-million-more-for-kabankalan-airport/).

Presently, Zayco said an initial 217 meters of the runway, with a width of 30 meters, has already been paved using a P30-million budget.

The city government allocated an additional P40 million was for the concreting of another 320 meters, the bidding of which will start this month.

Zayco said the CAAP already awarded the P30-million contract to the winning bidder in Manila for the third concreting works.

He said this is aside from the P60 million secured from the Department of Science and Technology also for the runway.

With the P120-million budget, Zayco said they can complete the 1.2-kilometer runway, excluding the airport terminal.