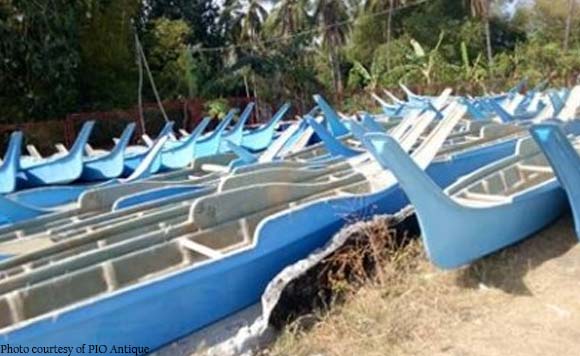 0 1,344
Share
Want more POLITIKO News? Get the latest newsfeed here. We publish dozens and dozens of politics-only news stories every hour. Click here to get to know more about your politiko - from trivial to crucial. it's our commitment to tell their stories. We follow your favorite POLITIKO like they are rockstars. If you are the politiko, always remember, your side is always our story. Read more. Find out more. Get the latest news here before it spreads on social media. Follow and bookmark this link. https://goo.gl/SvY8Kr

SAN JOSE DE BUENAVISTA, Antique — One hundred fishing boats from the Bureau of Fisheries and Aquatic Resources (BFAR) as assistance to the livelihood of marginalized fisherfolk in Antique are still to be claimed by recipients.

Alletth Gayatin, Office of Provincial Agriculture (OPA) Senior Aquaculturist, said in an interview Monday that the majority of the remaining boats are intended for fisherfolk in the island municipalities of Caluya, Tibiao, and Culasi.

The boats are still at the provincial government property in Barangay Badiang, in this capital town.

“Around 60 units of the boats are really for Caluya while the others are for Tibiao and Culasi,” she said.

Together with BFAR, she said they had been calling for the local government units (LGUs) to assists the fisherfolk in the transportation of the fishing boats since June.

“As for Caluya, the LGU has already communicated to help transport the boats and so we expect it to be anytime now,” she said.

The provision of the fishing boats is part of BFAR’s FB Pagbabago program, a livelihood intervention for Filipino fisherfolk.

On top of these units, Gayatin said that an additional 311 fishing boats are currently being built for Antique fishermen.

“The additional boats are the commitment of then-Department of Agriculture Secretary Emmanuel “Manny” Piñol to the fisherfolk when he last visited Culasi,” Gayatin said.

Piñol vowed to provide 750 fiberglass boats to a different set of marginalized fisherfolk. Of the commitment, 439 boats had already been distributed. (PNA)