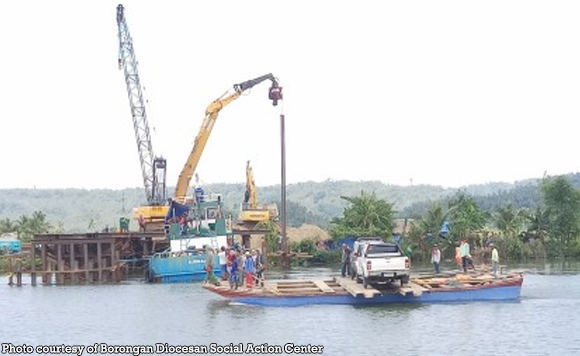 0 1,049
Share
Want more POLITIKO News? Get the latest newsfeed here. We publish dozens and dozens of politics-only news stories every hour. Click here to get to know more about your politiko - from trivial to crucial. it's our commitment to tell their stories. We follow your favorite POLITIKO like they are rockstars. If you are the politiko, always remember, your side is always our story. Read more. Find out more. Get the latest news here before it spreads on social media. Follow and bookmark this link. https://goo.gl/SvY8Kr

TACLOBAN CITY — Construction of the nearly P1 billion Korean-funded project Samar Pacific Coastal Road is caught in a rut, the Department of Public Works and Highways (DPWH) has reported.

The project, which started in May 2018, is only 14-percent complete as of the first week of September, way behind than the 40-percent target completion rate for the period, the DPWH said in its report shared with the Philippine News Agency (PNA) on Tuesday.

DPWH 8 (Eastern Visayas) construction division chief Sandy Pua said there is a huge possibility the project would be extended beyond its original expiry date in May 2020.

“It’s not realistic anymore to build the project on time. It has been delayed due to peace and order problem and unfavorable weather. There are only two types of weather in Northern Samar – wet and very wet,” Pua said.

Contributing to the delay is the presence of armed rebels in the area. Last May 21, rebels attacked a group of soldiers securing construction equipment of the foreign-funded project in Palapag in Northern Samar. Both sides had casualties.

“The project will surely be extended due to some conditions beyond the control of contractors,” Pua added.

Shortly after the project’s groundbreaking last year, DPWH officials had expressed confidence in its timely completion, citing the foreign contractors’ capability and lessons learned from past projects in Samar Island.

The P997.50-million road project, funded through a loan from the South Korean government, will open an 11.6-km. two-lane road and build three bridges. The Korean contractor aims to complete the project by March 2020.

Under the agreement, the DPWH shoulders the cost of road right-of-way acquisitions.

To reach the capital town of Catarman, residents of Palapag and three other Pacific towns — Mapanas, Gamay, and Lapinig — need to cross a river twice through a pump boat ride.

From the port in Pangpang village in Palapag, travelers need to cross a river to Calomotan village of Laoang, then take a boat ride to the port in the town center, and ride another pump boat to cross the river going to Rawis village.

In 2017, the DPWH pushed for the extension of the validity of a Korean-funded loan for the Samar Pacific Coastal Road due to pre-construction delays.

The National Economic and Development Authority – Investment Coordination Committee – Cabinet Committee approved on Dec. 6, 2017 the loan validity extension of the foreign-funded project from Jan. 18, 2018 to Jan. 17, 2020.

The project failed in the past due to security issues, bidding failures, concerns on the hiring of consulting services, and late submission of deliverable bidding documents.

Continue Reading
Department of Public Works and Highways (DPWH)KoreanSamar
0 1,049
Share
Politiko would love to hear your views on this...
More Stories