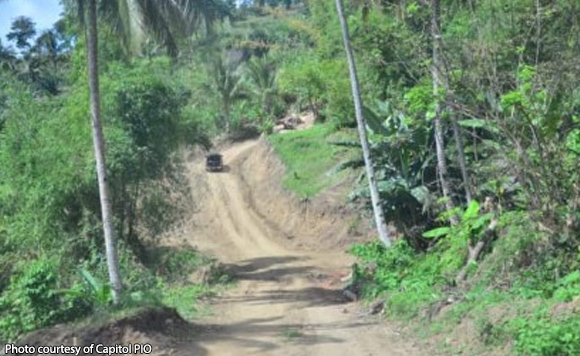 0 952
Share
Want more POLITIKO News? Get the latest newsfeed here. We publish dozens and dozens of politics-only news stories every hour. Click here to get to know more about your politiko - from trivial to crucial. it's our commitment to tell their stories. We follow your favorite POLITIKO like they are rockstars. If you are the politiko, always remember, your side is always our story. Read more. Find out more. Get the latest news here before it spreads on social media. Follow and bookmark this link. https://goo.gl/SvY8Kr

ILOILO CITY — The mountainous villages of Quipot and Barasalon in Janiuay town, Iloilo will soon benefit from the 2.7 concrete pathway that officially started construction on Thursday.

Iloilo Governor Arthur Defensor, Jr., in a press conference on Friday, said the project is part of the Forestland Management Project (FMP) of the DENR funded by the Japanese government through the Japan International Cooperation Agency.

“This is good news. This project is a concrete pathway from Quipot village to Binulosan, which are mountainous areas,” he said, adding that the project was conceptualized during the time of former governor Arthur Defensor, Sr.

Defensor, Sr. signed a Memorandum of Agreement (MOA) with the DENR to implement the FMP in the municipalities of Janiuay, Lambunao, and Calinog.

FMP aims to rehabilitate the denuded forestlands of the Jalaur River Basin and at the same time support the community through Agroforestry Support Facilities such as concrete pathways, irrigation pipeline systems, concrete bridge, and hanging bridges.

The Quipot-Barasalon pathway has a width of 1.25 meters and its contractor Micro Asia Builders Corporation is tasked to finish the project within 270 days.

The governor said the pathway will facilitate the easy transport of goods in the villages. Motorcycles can also make use of the project to reach the hinterlands, he said.

“We can also deliver other services (to mountainous villages) better and easier,” he said.

Defensor also assured residents in the villages that the government is thinking of more long-term projects that could benefit the upland barangays not only in Janiuay but also in other parts of the province.

Iloilo 3rd District Rep. Lorenz Defensor, who also graced the groundbreaking ceremony, vowed to help provide electrical posts to energize areas in the two barangays not yet reached by electricity.

The governor said a groundbreaking is also scheduled on Feb. 21, for a hanging bridge project at Supanga village, Calinog.