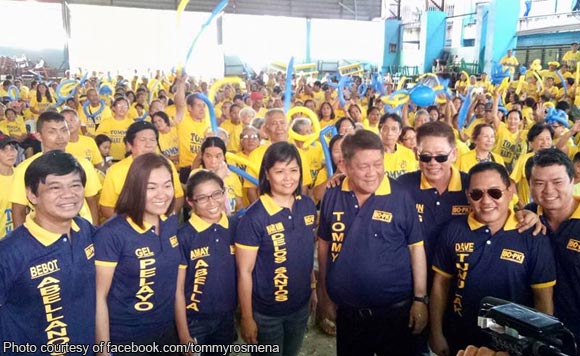 CEBU CITY — Candidates from the Bando Osmeña-Pundok Kauswagan (BOPK) party will file their certificates of candidacy (COC) before the Commission on Elections (Comelec)-Cebu City Office on Monday.

This was announced by Mayor Tomas Osmeña during a gathering of BOPK candidates and supporters at the Lahug Elementary School Gym, where he also disclosed the party’s complete lineup for the 2019 midterm elections on Saturday.

Mayor Osmeña said he will be seeking reelection and confirmed earlier reports that Councilor Mary Ann delos Santos will be his running mate.

The mayor said he chose delos Santos as he is confident that the administration’s programs and projects will be properly and efficiently implemented with the latter sitting as presiding officer of the City Council.

“Tomorrow must be better than today. With your help that would definitely happen. So let us help Mary Ann delos Santos become our vice mayor,” Osmeña told BOPK supporters.

Delos Santos once served as barangay captain of Lahug. She ran for mayor against Osmeña in 2007 and for Congress in 2010 under the Kugi Uswag Sugbu (Kusug) party of former mayor Alvin Garcia but lost. She later joined the BOPK and won as city councilor in 2013.

Other candidates in the BOPK slate for next year’s polls include Cebu City Rep. Raul del Mar and Rodrigo Abellanosa, who are also seeking reelection in the North and South Districts, respectively.

More than 2,000 BOPK supporters and more than 50 barangay captains allied with the party attended the gathering. BOPK is a regional political party based in Cebu City. (PNA)