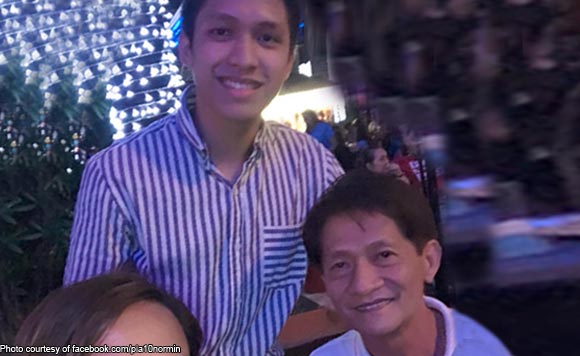 Eduardo Ong Sr. got a fresh term as mayor of Carigara town while his son Eduardo Jr. beat the incumbent Vice Mayor Mildred Modesto. The young Ong garnered 20,585 votes while his opponent, a veteran politician, only earned 7,317 votes.

The father succeeded in his bid to lead the town for a third term after obtaining 23,571 votes, defeating his challenger, town Councilor Rachel Makabenta, who only got 4,228 votes.

“I am thankful that for the third time, the people of Carigara chose me as their mayor. The trust and confidence given to me by the people of Carigara, will serve as my motivation to work hard and to bring necessary improvements,” Eduardo Sr. said in an interview after their proclamation Tuesday.

Eduardo Jr. is a fresh graduate of business management of the De La Salle University in Manila where he grew up. Since last year, he’s been running a comedy bar with 10 workers in Metrowalk, a commercial hub in Pasig City.

Managing businesses runs in their blood. His father’s family-owned Cherry Foodarama, which has been in the business since the early 1950s, and is considered one of the pioneers in the grocery business. In 2015, SM Investments Corp. acquired the business.

The son considers his win as an opportunity for him to contribute to the sustainable development of Carigara town.

“Even though I’m the youngest to hold a vice mayoralty position in Leyte, I won’t take the responsibility lightly. Rest assured, I, together with the eight newly-elected councilors, will maximize this opportunity to change the lives of the people of Carigara. Thank you so much!” Eduardo Jr. said.

Of the eight newly-elected town councilors, seven are allies of the Ong family. The younger Ong is reportedly being groomed by his father to replace him in the mayoralty post in 2022.

The Ong clan is known for toppling the Apostol political clan, one of the oldest dynasties in central Leyte.

Eduardo Sr. dislodged two members of the Apostol family in the 2013 and the 2016 mayoral race, ending the decades-long rule of the Apostols in Carigara town.

The mayor’s brother, Henry, won in 2016 as Leyte second district representative against Sergio Apostol, a former lawmaker and Cabinet official, who ruled the legislative district for decades.

The 2019 mid-term poll is not completely successful for the Ong clan after Henry failed in his bid to be re-elected as a lawmaker.