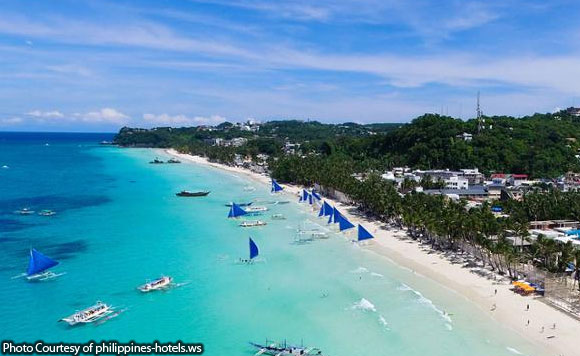 Tourism Secretary Bernadette Romulo-Puyat is deferring details on Boracay’s reopening to the Department of Environment and Natural Resources (DENR), but shared hopes the inauguration of the rehabilitated island will push through on its expected opening day, October 26.

“The one that will officially say that Boracay will be reopened is Secretary Roy Cimatu because he is the head of the task force of the rehabilitation of Boracay,” she told reporters in Makati.

“Provided that we get his go signal and that all environmental laws are complied with, we are hoping that Boracay will be opened on October 26.”

The task force discovered “a lot of illegal pipes,” said Romulo-Puyat. “(Secretary Cimatu) has been enforcing that these illegal pipes be removed.”

“I’ve already talked to the DPWH (Department of Public Works and Highways), they have been building the roads, so the infrastructure is there. It will be on time, again, provided that, of course, Secretary Cimatu would be the best person to say, environmental laws are complied with, Boracay will be opened.”

Boracay was closed last April 26 to fix its sewage and address numerous environment-related problems. June 26 will mark the second month of the rehabilitation.

Hoping for a change of mind

Last May, European Chamber of Commerce of the Philippines President Guenter Taus said the closure of the island made it “hard to sell” the Philippines as a tourism destination in Europe.

Romulo-Puyat, on the other hand, is hopeful that the Europeans will change their minds once the country’s top tourist draw concluded its rehabilitation.

“We hope that when, again I am hoping, when it is decided Boracay will be opened October 26, the Europeans will take a second look because we are now complying with all the environmental laws.”

Taus had said European tour operators were now hesitant to “touch the Philippines” after having a hard time refunding their canceled bookings. He said the tour operators are “scared” that similar move from the government would happen to any Philippine islands.

But Romulo-Puyat assured that the private sectors themselves were exerting efforts to avoid similar instances on their respective island destinations, such as Cebu.