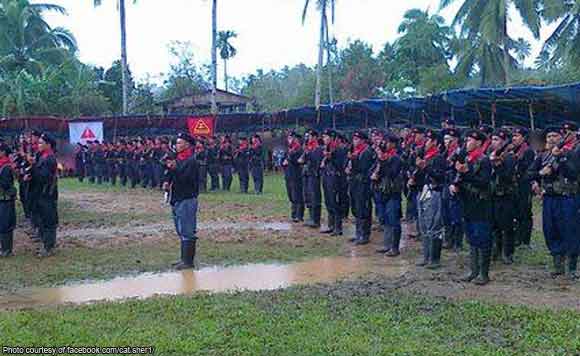 0 526
Share
Want more POLITIKO News? Get the latest newsfeed here. We publish dozens and dozens of politics-only news stories every hour. Click here to get to know more about your politiko - from trivial to crucial. it's our commitment to tell their stories. We follow your favorite POLITIKO like they are rockstars. If you are the politiko, always remember, your side is always our story. Read more. Find out more. Get the latest news here before it spreads on social media. Follow and bookmark this link. https://goo.gl/SvY8Kr

The unprovoked New People’s Army (NPA) attack on troops conducting relief operations in ‘Urduja’-battered Northern Samar is the reason why the Armed Forces of the Philippines (AFP) is not keen on having a Yuletide truce with the communist terrorists.

“We condemn this attack. It only manifested the true color of these communist terrorists. This only validated the aptness of government’s decision to terminate the peace negotiations and to discontinue the traditional Christmas truce,” he added.

Arevalo said the rebel attack on soldiers on their way to conduct humanitarian assistance and disaster response operations is an affront, not to the military, but to the Filipinos’ sense of love and compassion to their countrymen affected by ‘Urduja’.

Last Dec. 16, soldiers from the 20th Infantry Battalion, a field unit of the 8th Infantry Division, was headed for Barangay Hinagonoyan, Catubig, Northern Samar for relief missions when fired upon by some 50 communist terrorists at around 3:20 p.m.

The firefight lasted for an hour which resulted in the wounding of two government troops namely, Cpl. Yzazel M. Laure and Pfc. Ronald. L Gomez. (PNA)