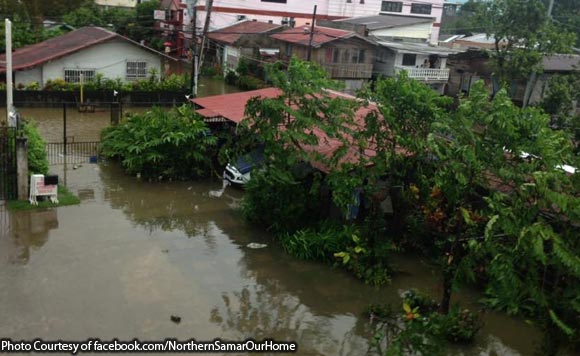 0 555
Share
Want more POLITIKO News? Get the latest newsfeed here. We publish dozens and dozens of politics-only news stories every hour. Click here to get to know more about your politiko - from trivial to crucial. it's our commitment to tell their stories. We follow your favorite POLITIKO like they are rockstars. If you are the politiko, always remember, your side is always our story. Read more. Find out more. Get the latest news here before it spreads on social media. Follow and bookmark this link. https://goo.gl/SvY8Kr

The provincial government of Northern Samar has placed the entire province under a state of calamity Thursday night as heavy rains dumped by Tropical Storm Urduja flooded several villages.

“With the way the storm was traversing the place, it would take two to three days before evacuees would be allowed to return to their homes,” Echano said.

The local government also reported that 1,797 passengers have been stranded in the ports of Allen and San Isidro in Northern Samar as of Thursday night.

Earlier, the town of Catarman and Catubig also declared a state of calamity as the storm intensified and dumped more rains in Eastern Visayas.

The Philippine Disaster Risk Reduction and Management Act of 2010 defines a state of calamity as “a condition involving mass casualty and/or major damages to property, disruption of means of livelihoods, roads and normal way of life of people in the affected areas as a result of the occurrence of natural or human-induced hazard.” (Roel T. Amazona/PNA)