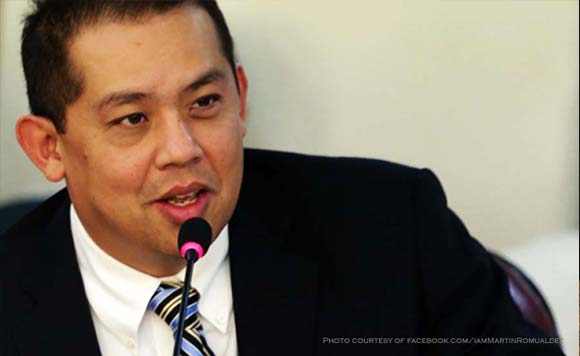 0 694
Share
Want more POLITIKO News? Get the latest newsfeed here. We publish dozens and dozens of politics-only news stories every hour. Click here to get to know more about your politiko - from trivial to crucial. it's our commitment to tell their stories. We follow your favorite POLITIKO like they are rockstars. If you are the politiko, always remember, your side is always our story. Read more. Find out more. Get the latest news here before it spreads on social media. Follow and bookmark this link. https://goo.gl/SvY8Kr

After being considered by President Rodrigo Duterte as a viable vice presidential candidate, House Majority Leader Ferdinand Martin Romualdez has filed his certificate of candidacy (COC) and seeks reelection as Representative of Leyte.

“I decided to seek reelection in response to my constituents’ clamor for me to continue serving them as their congressman,” said Romualdez after filing his COC before the Commission on Elections (Comelec) Provincial Office in Tacloban City.

Romualdez again thanked Duterte for considering him as a viable and worthy candidate for the vice-presidential post.

“His repeated endorsement and words of encouragement truly serve as an inspiration. For believing that I have what it takes to occupy the second highest post of the land, I will be eternally grateful to the President,” he added.

Among the measures he authored that became laws are Malasakit Centers (RA 11463), Modernization of the Bureau of Fire and Protection (RA 11589), Extending the Period of Availment of the Estate Tax Amnesty (RA 11569), Bayanihan 1 (RA 11469), and Bayanihan 2 (RA 11494), Institutionalizing the Alternative Learning System in the Basic Education for out-of-school Children in Special Cases and Adults (RA 11510), Establishing the COVID-19 Vaccination Program (RA 11525), Converting the Schistosomiasis Control And Research Hospital in Palo, Leyte into a General Hospital to be known as the Governor Benjamin T. Romualdez General Hospital and Schistosomiasis Center (RA 11566), and increasing the bed capacity of Eastern Visayas Regional Medical Center ang changing its name to Eastern Visayas Medical Center (RA 11567).