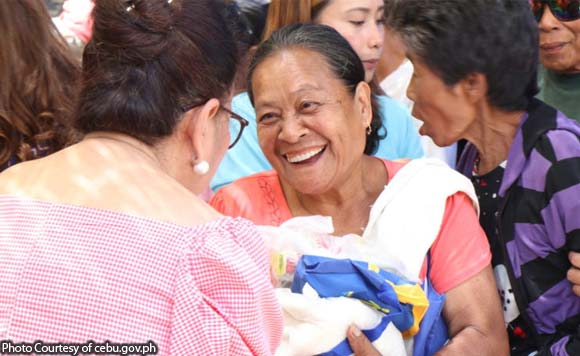 0 1,255
Share
Want more POLITIKO News? Get the latest newsfeed here. We publish dozens and dozens of politics-only news stories every hour. Click here to get to know more about your politiko - from trivial to crucial. it's our commitment to tell their stories. We follow your favorite POLITIKO like they are rockstars. If you are the politiko, always remember, your side is always our story. Read more. Find out more. Get the latest news here before it spreads on social media. Follow and bookmark this link. https://goo.gl/SvY8Kr

At least 10,026 senior citizens in Mandaue City and Consolacion town in Cebu received gifts from the Cebu provincial government as part of its program for the elderly.

Gov. Hilario Davide III and Vice Gov. AA. Magpale led the distribution of the food packs and hygiene kits in Mandaue and Consolacion.

Magpale encouraged the senior citizens to avail of the Capitol’s programs, such as the free hearing aid, by having their names listed at the Vice Governor’s Office.

For his part, Mandaue Mayor Gabriel Luis Quisumbing thanked Davide and Magpale for their gifts.

Quisumbing also announced an increase in the city’s financial assistance for the senior citizens from P6,000 to P8,000 this year. The first tranche will be given in April.

Consolacion Association of Barangay Councils President Wesley Alimorin noted many seniors no longer have the means to provide for themselves or have been abandoned by their children.