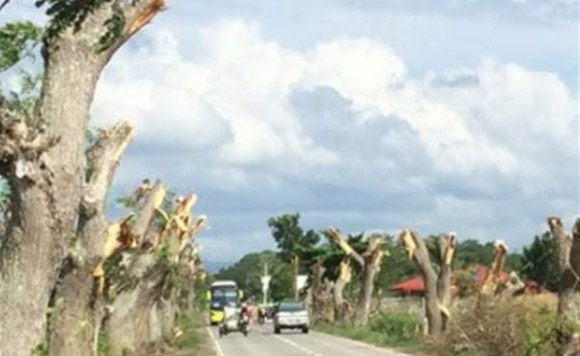 0 759
Share
Want more POLITIKO News? Get the latest newsfeed here. We publish dozens and dozens of politics-only news stories every hour. Click here to get to know more about your politiko - from trivial to crucial. it's our commitment to tell their stories. We follow your favorite POLITIKO like they are rockstars. If you are the politiko, always remember, your side is always our story. Read more. Find out more. Get the latest news here before it spreads on social media. Follow and bookmark this link. https://goo.gl/SvY8Kr

Concerned Negrenses are taking to the cyberspace the fight to save more than a hundred decades-old acacia trees on the roadside of Barangay Abuanan in Bago City, Negros Occidental.

An online petition has been launched on change.org and a Facebook page was set up to protest the cutting of the trees for the two-kilometer Sum-ag-Abuanan road widening project to be implemented by the Department of Public Works and Highways (DPWH).

As of Monday afternoon, about 5,800 netizens, not only from Negros and other parts of the country, but also abroad, have signed the petition titled “Killing Trees in the Name of Progress?” led by Sylvia “Gigi” Campos since it was launched nine days ago.

“The question now is, do we sacrifice the environment on the altar of development?” she said.

In the online petition, Campos wrote: “Let’s stop the Department of Environment and Natural Resources (DENR) from approving DPWH request to kill 271 (based on initial count) beautiful acacia trees along Abuanan Road in Bago City, Negros Occidental planted 31 years ago.”

“There are other ways to widen the highway. Let’s get this done and set an example of what they cannot do nationwide,” she added.

Records show the DPWH is seeking a permit from the DENR to cut 292 trees, including 135 acacia, 133 kamunsil, 10 coconut, eight mahogany, and six Indian mango, in the area.

After several trees have already been pruned, a moratorium on the cutting of trees stays, Mayor Nicholas Torres said during a meeting with stakeholders on July 12.

Negrense Thelma Watanabe said on her Facebook post on July 6 that the acacia trees were planted 31 years ago by members of Organization for Industrial Spiritual and Cultural Advancement (OISCA) from Japan as a sign of friendship between the Japanese group and the people of Bago.

“It’s a painful sight, 31 years to grow,” she said of the cutting of the acacia trees.

On Thursday, she and her husband Shigemi Watanabe, executive director of OISCA-Tabunan Training Center in Bago City, were among those who attended the meeting called for by the mayor.

During the meeting, DPWH representatives said the contractor, Silver Dragon Construction Inc., started to prune the trees even before a permit was issued by the DENR.

A local newspaper reported over the weekend that DENR-Western Visayas Regional Director Jim Sampulna said a public consultation should be held in Bago City on the request of the DPWH for permit to cut the trees.

On July 13, a group called PROTECT which stands for Preserve Respect of the Environment and Communities created a Facebook page to protest the cutting of trees.

“One incidence of the reckless cutting of trees in the name of progress got us together. We had no singular name, but rather, we lent our name to the singular voice that protested against the irregularity, and people listened,” the group said.

“After having found kindred spirits (and we welcome more), the PROTECT Team was born. We will stand up to deliver our piece and will hold our fight versus anyone who dares kill our precious trees or destroy our environment, without just cause,” they added. (PNA)