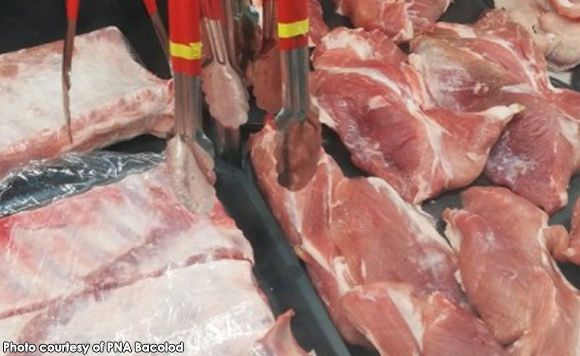 0 6,427
Share
Want more POLITIKO News? Get the latest newsfeed here. We publish dozens and dozens of politics-only news stories every hour. Click here to get to know more about your politiko - from trivial to crucial. it's our commitment to tell their stories. We follow your favorite POLITIKO like they are rockstars. If you are the politiko, always remember, your side is always our story. Read more. Find out more. Get the latest news here before it spreads on social media. Follow and bookmark this link. https://goo.gl/SvY8Kr

BACOLOD CITY — The Negros Occidental provincial government has remained firm in enforcing the ban on pork from Luzon even as the Department of the Interior and Local Government (DILG) encouraged local government units (LGUs) to ease restrictions.

“The Provincial African swine fever (ASF) Task Force is of the firm position that any premature lifting of the existing ban will pose serious and irreversible damage to the PHP6-billion provincial swine industry,” the body stated in a resolution posted on its Facebook page on Thursday.

The decision was unanimously carried by the Provincial ASF Task Force during its meeting on Wednesday and approved by Governor Eugenio Jose Lacson, who sits as the chairperson.

“The task force will wait for the official copy of the mentioned DILG memorandum encouraging the lifting of the ban before taking action on the matter,” it added.

However, the Provincial ASF Task Force further resolved that it will “move for the reconsideration of any memorandum issued recommending the lifting of the ban as it is inimical to the food security program of the Province of Negros Occidental”.

“The Task Force will continue the full implementation of the existing 90-day ban,” it added.

In a memorandum circular to governors, city and municipal mayors, and village chiefs, Secretary Eduardo Año directed LGUs to allow the distribution and sale of processed meat products that contain pork as an ingredient in all provinces subject to certain conditions.

“Since the government has been acting aggressively and effectively to address the ASF outbreak, we are urging all LGUs to lift the ban on processed meat products containing pork for as long as the products meet certain conditions imposed by the Department of Agriculture,” the DILG chief added.

On Wednesday night, task force personnel seized a shipment of 8,640 packs of siopao or 51,840 pieces at the Bredco port in Bacolod City, and sent it back to Cebu.

Although the delivery truck came from Mandaue City, documents showed that the manufacturing address is Quezon.

On the same day, an inspection team of the Pontevedra Municipal Agriculture Office in the south confiscated 21 cans of imported pork products and three kilograms of imported pork jowls in the town’s public market.

Negros Occidental, the country’s number one backyard hog producer, with a PHP6-billion swine industry, has enforced since September 18 the temporary ban on the entry of pork and pork products from Luzon, where positive cases of ASF have been reported. (PNA)